With many changes in plans and swift maneuvering, almost 500 Grand Rapids Community College students were honored during the four commencement ceremonies that took place on April 30 and May 1. While the in-person attendance was sparse, many students were able to walk across the stage and fist bump President Bill Pink.

As COVID-19 began to surge once again in early April, GRCC stepped back from original plans for in-person graduation by asking students to watch along at home or to attend alone and have their loved ones tune in to the live stream.

Before Friday’s 7 p.m. ceremony, Rosa Ramos, 29, from Guadalajara, Mexico, stood in the line of graduates just outside the Fieldhouse on April 30, awaiting her moment to walk across the stage to accept her Associate’s of Arts degree. Knowing the ceremony was off-limits for family, Rosa’s husband, Leonel, stood patiently along the street to catch a glimpse of his wife before she entered the Fieldhouse. He shared that over the course of three years, Rosa has been working full-time, currently as a medical assistant at Spectrum Health, while she worked toward her degree at GRCC.

“She is really excited,” Leonel said. “She has been working for this for a long time.”

He explained that Rosa’s accomplishment is just one more step toward better things for their family, as Rosa moves on to pursue a degree in Physician Assistant Studies at Grand Valley State University.

Throughout the ceremony, speakers noted the historical significance of this specific graduating class. On top of the myriad of obstacles that many students face obtaining a degree, these graduates all faced the obstacle of obtaining that degree during a global pandemic.

During a filmed address to graduates, Trustee Kenyatta Brame noted the unique accomplishments of this class.

“Usually we pack the gym tight with our friends and family, staff and faculty,” Brame said, touching on the difficulty of not celebrating together in person “There are lots of hugs of joy, high fives, fist bumps and I usually have the honor of shaking your hands. The fact that we are not together because of the pandemic does not take away from this significant accomplishment. In fact, it highlights the many things you have overcome to get to where you are today.”

The August 2020 commencement was shifted to a completely virtual event due to the pandemic, leading the original keynote address for graduates by one of the three honored GRCC alum, Wyoming Public Schools Superintendent Craig Hoekstra, to inevitably be postponed. While that was not able to happen last year, Hoekstra was asked to return for the 2021 graduates in a recorded video address.

“Some time ago, you set a goal, and you worked hard, and we are here to honor and celebrate you,” Hoekstra began. “Certainly, you will take all the great things that came out of your GRCC experience and as you go forward and apply it to do great things in our world.”

He detailed the courageous implementation of resilience, patience and flexibility that was necessary to complete a degree path during universally trying times.

Alongside Hoekstra, the ceremonies celebrated two more alumni as inspirational and aspirational figures for graduates. The 2021 Distinguished Alumni Award being dedicated posthumously to Sekou Smith, noting his accomplishments in life and within sports journalism through a video tribute featuring his sister Misti Smith Stanton, who also attended GRCC.

She let graduates know that if Smith were there, he would’ve told them “that GRCC has positioned you and prepared you for greatness.”

The 2021 Faculty Emeritus honor was presented to Sandra Andrews, who began her higher education at GRJC and later was a chemistry professor at her alma mater from 1993-2013. Through a video compilation, many of her former colleagues spoke of her as an admired and respected leader within the department. 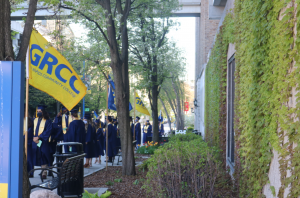 Pink ended the ceremony with a story of a friend gifting him a fresh, unused golf ball from a Masters’ Tournament. Because he enjoys the sport, the gifted ball lives in the president’s office on a shelf to this day. He details that although the ball on the shelf is a cool reminder of its significance, that was not its intended purpose. It was meant to be played with.

“Whatever it is you choose to do (from here), do not just let a degree just sit on a shelf,” Pink said. “That’s not what you got it for… Make that next count for you, for your family, for this community. I am proud that you’re Raiders,” Pink said, as he congratulated the graduates for transitioning within the GRCC family from student to alum.