In March of 2020, the details of wedding planning had yet to overwhelm me as my August nuptials approached. My fiance Michael and I are fairly modest, simple, frugal – all of the polite words to describe a couple that is financially not about to drop $10,000 on a wedding. So, we decided to leave the reception planning to professionals. They would bring in food from restaurants from all over Chicago, activities for all ages (even a skate ramp for kids), and some of the top musical artists from across the globe would perform on eight stages. Alleviating much of our wedding planning stress, was the staff of Lollapalooza.

On the night we met, I was smitten with this man who had such an interest in music. The house party that my coworkers at my new job convinced me to attend was quickly filling up with bodies, many I didn’t know. As I began to socialize, a vision of punk rock beauty in a plaid button-down emerged from a room across the way. We locked eyes.

“Nice shirt,” he said, referring to the white cat that only represented a band to those who were familiar with the likes of Wilco. My feet knew I wanted to get to know him before my mind did, and I found myself promptly walking toward him. Over the course of the evening, we forgot about the party and talked about concerts, our favorite bands and where we held our musical roots.

Coming from a musical family, I had a lot to say about it for anyone who took the time to listen.

Growing up, my father was a local solo artist that played at restaurants and benefit concerts across West Michigan and had previously been in a few popular local bands. While other kids were showing me the wonders of early-aughts teen pop sensations, my father was showing me how emotionally diverse songwriting could be with music from the Beatles, Carole King, Roy Orbison, and so many more talented artist.

He taught the importance of music to my older brother, Josh, nine years before I came along and that gave him a sizable lead to explore the talent of the 90s. With the base knowledge of how music worked structurally and emotionally, Josh found love for artists beyond the net cast by our father. Countless artist from countless genres, but some notable favorites being The Strokes, Beck, Green Day, Radiohead and Wilco.

Over the years, my brother and I bonded over the music he fell in love with and shared with me. We wrote together, listened together and often played as a duo in our free time. Wilco was one of the bands that always stuck with me, their music was starting to soundtrack a huge part of my life. My early adulthood was filled with angst, pain, melancholy, happiness, heartache, love and hope for the future, and Wilco had a special ability to provide me with emotional literacy to feel the weight of what it means to be human.

I had never really been to a concert, let alone an entire weekend festival. My first conversation with Michael involved some of his elaborate tales of his favorite shows and experiences from his many trips to Chicago to attend Lollapalooza. It was one of those moments where you are in awe of someone recounting their life experiences, almost skeptical of their stories that sound too good to be true. It sounded a little far-fetched to me that someone would enjoy running a mile from stage to stage for 11 hours straight, four days in a row in the summer heat.

Thursday, Aug. 2, 2018, I found myself spread eagle on a dingy hotel room floor. Throbbing feet, sweat pooling, sunburnt shoulders, ears ringing, and every cell in my body pleading me to chug more water.

As I mustered up the energy and faith in my feet to withstand the weight of my body for an entire shower’s length of time, I felt a heavy feeling wash over me. I realized that day was one of the first times I ever experienced the true beauty of music.

I found that something unique happens when you are standing in a crowd of 10,000 people at Lollapalooza. The stress of life outside the festival gates melts away and your mind opens fully to the present moment. You simultaneously feel the energy of every single person around you and recognize your own in its entirety. There is a magical realization that all of the people around you are so different and unique, but you all share something in common – the love of music ringing from the stage in front of you. The true beauty of music is duality. It is for you, and it is for everyone.

The next day, Michael and I were running around the festival separately before the headliners took the stage. We decided to meet up at our designated hydration station signpost to watch Bruno Mars at the end of the night. I made my way from listening to one of my favorite bands, The National, at one end of the park to the meeting place. As I approached the signpost, I saw Michael and his curly hair bouncing on the grass as he physically expressed how much he was enjoying this moment. One of those split seconds where your heart signals a message to your brain to say, “this thing you are seeing right now will be a vivid picture in your mind for the rest of your life.” I took the mental picture and then I registered Bruno Mars’ words that were radiating through the trees.

“It’s a beautiful night, we’re looking for something dumb to do. Hey baby, I think I wanna marry you.”

A cosmic shot to the heart. It was one of those instants where, upon recollection, your dopamine levels rush up to the exact measure of that second in time, where you can smell the heat of that day fading into a summer night, and the universe enveloping you as if to say, “this is where you are meant to be.” Turns out, that moment that is now such a vivid picture, was when we both knew we wanted to marry each other.

A year later, on Aug 1, 2019, we announced that we were engaged to be married a year to date. Our ceremony was to take place just a few blocks from Grant Park at a favorite Karaoke bar, Brando’s, and celebrate our reception at the Lollapalooza 2020 festival. This method of celebration was the perfect embodiment of our relationship, the beauty of our relationship involved us so naturally being individuals and being us. The duality of music was something we both enormously enjoyed, and reflected how we felt about being together, making a music festival all the more fitting for us to center our wedding around.

The excitement of our wedding invitations arriving in the mail quickly faded. Only hours after fawning over the freshly printed papers resembling a vintage summer concert poster, the world came to a halt. Growing reports of countries shutting down, states going into lockdown and a looming cloud of fear for the unknown consumed most of the globe. Weeks went by, and the photos of the streets in downtown Chicago with no life present were a heavy indicator that our wedding was the least of our worries.

We waited to postpone, hoping to see a glimmer of hope that things would turn around and the festivities would resume. They didn’t, and we finally announced that our wedding was indefinitely postponed.

I have one of the invitations sitting on my desk to this day, a whole year later. Maybe I am keeping it there in the open just as a masochistic reminder of the derailing, but perhaps it symbolizes something bigger than that. Looking at the invitation now, I hold a sense of sadness, uncertainty and loss, but I also feel hope, curiosity and excitement.

One of my major life events is in a place of suspended reality. Michael and I were placed in an uncomfortable position where a wedding could still happen, even in the fashion that we had originally planned, but nobody could say when. Like so many others across the globe, we have been sprinting through the past year hoping someone can give us an answer, hoping that someone or something can fix the pandemic and return us back to normalcy, letting us continue on with our lives. But if I have learned anything from a global pandemic, I’ve learned to cherish the moment. 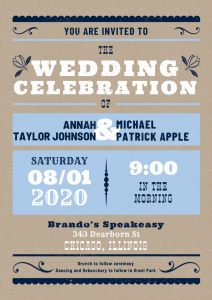 When you are walking back to the hotel after a concert and you think about how that moment in time is now just a memory, it reminds you how fleeting time can be and how enjoying moments for what they are is so important. When I am looking back, reminiscing about seeing Bruno Mars, I think about how beautiful of a memory that was because I was so truly present in that moment. Looking back at the last year, I realize now that I had spent a lot of time just praying the days away, waiting for this seemingly neverending moment to pass.

Now, looking at this invitation, I see so much more than a piece of paper with a general itinerary. I see Michael’s name beside mine, right where it’s supposed to be. I see all of our memories of countless concerts, melting ice cream cones, sleepy Saturday mornings and everything in between. I see my family for what it is now and the potential for it to grow. I see dates that can be easily changed with some craft supplies. I see that I don’t want things to go back to normal, I want things we have learned through the pandemic to generate some much-needed change. I see the past year in all of its duality, the collective sadness and pain, but also as the once-in-a-lifetime opportunity to step back and remember to cherish my loved ones. I see a lifetime ahead of me, and I don’t want to waste any more time proverbially waiting for my life to begin.

The fate of my wedding is in the hands of many some spike proteins, the country as a whole, lawmakers, the State of Illinois, Perry Ferrell – all but my own. Until Perry lets me know the details, I’m happy to wait and cherish every moment I have in the meantime with Wilco playing in the background.