“You’ve got to be kidding me!” screams the coaches and parents as their team gets called for another penalty. As I skate the offending player to the penalty box, I get another earful from the team’s coaching staff. I signal to the scorekeeper the sign for a hook. This is just another day as a referee.

As a fourth-year official, I’ve come to know the game of hockey at a more complete level, and have come to understand the difficulties of being a referee.

Transitioning from a player to a referee was not an easy task. As a player you think you know everything about the game, but you come to find out that you don’t know half of it. For example, when you are officiating you have to watch every player to the best of your ability, and as a player, you only have to focus on the puck, and one or two players at a time.

As a player, you are focused on making plays and reading and reacting to the game around you. You are on the ice for only a portion of the game and have times to regroup and rest.

As an official you are out there watching the play, staying out of the way of the players, and making sure the game is played in its proper fashion, all while trying to remember all of the rules. Unlike the players, the officials are on the ice for the entire game with minimal breaks, and they always have to be prepared and ready for all kinds of situations.

Officials are instructed to arrive at the rink half an hour before puck drop. They then report to the referee locker room where they begin to put their gear on. It might not look like a lot, but most officials wear all kinds of padding and protection so we can avoid injuries. Once we are dressed and ready, we roll out and hit the ice.

Whether it’s a youth squirt game (ages 11-12) or a high school varsity game, you’re always a little nervous as to how the game will play out. As a young official, I want to do the best I can to make sure the game is played the way it is supposed to be played so that I don’t receive any criticism from either team or from the fans.

While as a referee, you are a human being and do make mistakes, coaches and players don’t seem to understand that. Players and coaches tend to disagree with our officiating decisions quite often. This tends to lead to arguments and talks between us referees and coaches, and sometimes things get a little too heated.

Depending on who you are as an official, you can react to criticism in many different ways. As someone who’s been cussed and screamed at by coaches and players, I have been usually a very chill person when it comes to calling penalties. Others might not be so calm, I have seen my reffing partners and colleagues throw coaches out of games because they can’t seem to find their off switch.

“You are so brutal… That’s a terrible call… Are you f****** kidding me?” These are all phrases we have heard over the years as officials, whether it be from players, coaches, and even the fans. As a former player, I have even been one of these athletes from time to time, and have had to do some extra time in the penalty box for my actions.

As a referee, you have the power to defuse the situation in whatever way you can. If a player talks back or cusses you out, you better believe I’m sending them to the box. Any player who does so is assessed a two-minute minor for unsportsmanlike conduct and can be given a 10-minute misconduct penalty as well. Meaning they will be in the so-called “sin bin” for 12 minutes total, where they can think more about what they’ve done.

With officiating there is so much going on within each game, and every game has totally different outcomes. These outcomes can come down to the decisions that we make as officials. Say you call a penalty on one team and the team on the powerplay scores, just like that you had an effect on the game, whether or not the penalty was a good call or not.

With these responsibilities, reffing can be quite stressful in some situations, especially for young officials. As a young official myself, it can be quite difficult to learn the game as a referee, even if you think you know the sport. One tip that can help young officials is to call what you see. If you see something and you think it was a penalty put your arm up and make the call.

When it comes down to it officiating is very fun and a great way to be a part of the game of hockey. While being a young official, it is important to build a good reputation and do the best you can to officiate and manage games in a smooth and professional manner. While officiating may look hard and stressful, it is truly a fun time and experience. As an official you have the power to control the ice, acting as a police officer for the sport of hockey.

Officiating does also offer a solid paycheck, ranging in pay from $18 to $65 per game. Reffing younger age groups would offer lower wages and higher wages with higher levels of hockey. In some cases when games go by fast, you can make more than $20 an hour. This sort of makes the constant yelling from coaches and fans worth it.

When climbing the ranks as an official it can be a difficult task, as someone who is somewhat short it can be a tough time moving up to higher levels. In higher leagues like Juniors or even the American Hockey League, they look for officials with a great physique and body structure. It is also essential that you are an excellent skater because you would be skating with some of the best skaters in the world.

In some leagues, officials must try out in order to officiate games at that level. In these leagues, officials are tested on their skating skills and their knowledge of the rules. When you first start officiating you are also tested on your rulebook knowledge, but you do not have to worry about your skating abilities as much as higher-level officials.

In the National Hockey League, the officials are more likely to be former hockey players, which makes it difficult for officials who started young to make it as a professional referee in the NHL, but if you work your tail off and officiate at a high level you might be able to make your way to the top. Like any job, if you want to be successful you have to work hard and fight your way to the top if you want to be the best. In my fourth year of officiating, I have worked hard and have been rewarded through my work. Currently, I still officiate young youth hockey but have been bumped up to the high school varsity level. Not many young officials can say they’ve accomplished this. As I continue to officiate year in and year out, I’ll continue to work at my craft and knowledge of the game. Hopefully, as I continue my work, I can soon find myself officiating much higher levels of hockey.

In the end, every game tends to finish the same way. Players shake hands or give stick taps, and the coaches shake hands and say good game. No matter what happens during the game, whether an official makes a good or bad call. The coaches and officials nine times out of 10 have a strong mutual respect for one another, and both leave the ice with a handshake and say, “Good game coach,” and “Thank you stripes.” 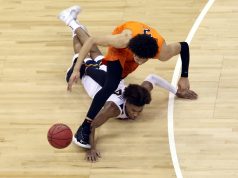