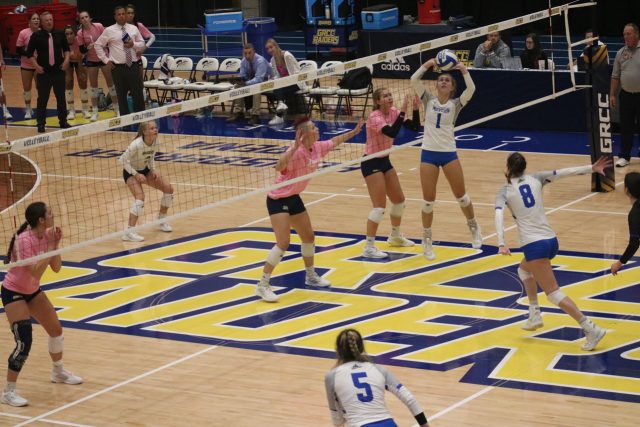 With their 18-game winning streak ended, the team saw many issues throughout the match. In the first set, the Raiders came out fired up and jumped out to a big lead which gave them the first set. The Raiders appeared confident after the first set but were met with some adversity while losing the next two sets. Set two was back-and-forth with the Jayhawks narrowly beating out the Raiders. The next set saw the Jayhawks get out to a comfortable lead and beat out GRCC once again for a 2-1 lead.

The Raiders came out in set four fired up and they finally got their offense in rhythm which led them to a 25-21 win to force set five. Set five was a battle, as each team went back and forth like a heavyweight bout, but the Raiders could not hold on as they lost the set 13-15.

Sophomore’s Eliza Thelen and Audrey Torres led the team in kills, each having 22 and 15.

Coaches and players could not be reached for comment after the game.

The Raiders move to 18-3 on the season with one regular season game remaining against Oakland Community College. GRCC will look to avenge their third loss when they take OCC on Thursday, Oct 27 at the Ford Fieldhouse.