If you’re unfamiliar with the dark and lascivious world of R&B singer Abel Tesfaye, AKA The Weeknd, he’s made quite a buzz in the world of indie-pop music.  “Echoes of Silence” is the final release in a trilogy of mixtapes available for free internet download by The Weeknd in less than a year’s time.

The first mixtape released in the spring of 2011, “House of Balloons” made quite a stir and quickly gained the attention of R&B artist, Drake, who began spreading the word about The Weeknd.  With hits like “High for this,” The Weeknd captured the self-destructive, nocturnal world of excessive drug and alcohol use and meaningless sex, producing some of the most daring, disturbing, and yet relevant editions to the R&B world.  “House of Balloons” was quickly followed up by “Thursday” and finally “Echoes of Silence,” which proves to be The Weeknd’s most intense release yet. 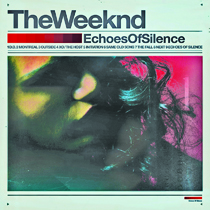 The album begins with “D.D.,” a ballad about groupie (Dirty Diana) that features some of Tesfaye’s most powerful vocals yet.  The track “XO/The Host,” a song split into two parts, stands as the typical queasy, red-eyed and dizzy, late-night lust anthem The Weeknd has made a name with.

With regards to R&B and modern pop, The Weeknd has delved into somewhat uncharted territory.  However, the previous two mixtapes drove home the theme of lovelorn fornication and the small hours during sleepless benders, so what more can another mixtape prove?  Amazingly “Echoes of Silence” presents a somewhat more self-examining side of The Weeknd.

Tesfaye lays his drug-induced lust out such a way that begs the listener to almost pity the artist.  “So baby don’t go home, I don’t wanna spend the night alone – Don’t you leave me all behind, don’t you leave my little life,” lyrics that end the album, and the trilogy, on a note that leaves The Weeknd seeming a little pathetic but brutally honest.

The mixture of haunting ambient effects and down-tempo beats beneath Tesfaye’s afflicted vocals make for the sexy yet disturbing musical experience we’ve come to expect.

Despite finding success with the free mixtapes, Abel Tesfaye has turned down million dollar record deals.  The Weeknd may be forever pegged for sensual, zoned-out and gritty R&B, but where will it go from here?