The songs are a bit faster, the tracks are more layered, and Danger Mouse’s influence is sprinkled throughout.   The Black Keys’ seventh studio album “El Camino” was a quick follow up to their widely successful previous album release, “Brothers.”

Producer Danger Mouse, who’s worked with many other successful acts including Jay Z and Beck, has worked with The Black Keys in the past.  His contribution as co-writer on their latest album “El Camino” is unmistakable.  Most of the songs are up-tempo and riff-driven, a change from their older sound which while heavier and harder, was slower. According to the band, the faster beats will translate better in a live setting. 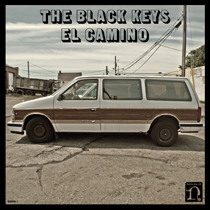 The duo, singer/guitarist Dan Auerbach, and drummer Patrick Carney, proved that little was needed to create head-splitting rock’n’roll.  Stepping on the scene in the early ‘00s with an electric guitar, some drums, and hell of a lot of volume, The Black Keys mastered the kind of hard-hitting blues-metal you’d expect to find resonating from your local dive-bar.  But the gritty, bluesy, rock that was perfected on their ‘06 album, “Magic Potion,” has been smoothing out over time.

The soulful sound found on “Brothers” takes on a bit of glam-rock gaudiness on “El Camino.”  The opening track “Lonely Boy” bursts in with a buzzing rock-a-billy guitar riff that makes its way to a catchy hook with something a bit unfamiliar; Auerbach’s tinny vocals are joined by a chorus (a trend that spans most of the album).   The stomps and claps that drove the hit, “Howlin’ for You,” from “Brothers,” make a return on the tracks “Dead and Gone” and “Gold On The Ceiling.”  And the track “Sisters” has a melancholy disco-rock feel reminiscent of classic-rock from ‘70s.

Considering that The Black Keys 2012 tour will be their first to headline major arenas, it makes sense that “El Camino” found the band’s full sound and sped up the beats.  No doubt they’ll play older hits, but filling an arena with sound is a little different than filling a bar with sound.  While the success of “Brothers” made full on rock stars out of Auerback and Carney it was a call to find a bigger, fuller, and faster sound, and do so quickly.  The end result, “El Camino.”