Every semester students at GRCC face certain truths: parking will be mess, the Subway lunch lines will be long, the student aid office will be busy, and the college will eventually want you to pay money for those classes you are taking.

After shelling out around $1,800 for classes this semester were were left with one question.

Where is all of our money actually going and what are these extra fees we have to pay?

According to Jim Peterson, Executive Director of Financial Services, all GRCC students pay regular tuition, as well as three universal fees. These include student records, technology, and a campus activities fee.

Some students pay more depending on whether they are enrolled in job training, construction trades, or have kids in the on-campus preschool. Certain courses also have extra fees to pay for additional materials and resources specifying to that course.

“When students pay tuition, and the records and technology fee, the money all goes into the colleges general operating fund,” Peterson said. “Those funds are used to support the main part of our business, which is providing students with classes and credits.” “The campus activities fee goes into a separate fund, that is managed entirely by the student government.” 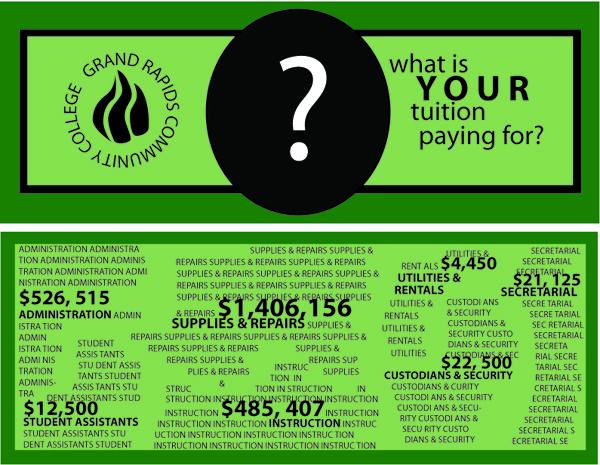 Peterson went on to explain that the money students pay for tuition is set by billing hour, but the universal fees are a set price. For the technology fee every student pays $5.50 per semester. Student records fee is paid at a split rate. Anyone with less than nine contact hours pays $26.50; anyone with more pays $37.00. Campus activities is also paid at a split rate; students taking less than nine contact hours pay $5.00 and those taking more pay $10.00.

“There is a reason that campus activities and the technology fee are on two tiers,” Peterson said. “We feel that a student that is here part time, not in every case, but generally is going to use less of those services.”

Prices for the extra fees are voted on by the Board of Trustees. In the case of technology and records, they are given a recommendation on what the prices should be by President Ender. Peterson elaborated by explaining how the process works.

“Ultimately the president sets the prices, with input by the cabinet,” he said. “The cabinet is made up of me, deans, and several other GRCC faculty. Depending on the needs of the school and projected enrollment we give him are information, then he takes that to the board of trustees. Campus activities fee is set also set by the board of trustees, but their proposal comes from Student Congress. This is the second year the student activities fee have been charged with tuition.”

Eric Mullen, head of Student Life, oversees the Student Congress. He believes that this fee is well worth paying.

“These funds are guaranteed to be available for students to benefit the student experience,” Mullen said. “If the fees were to come from college allocation then they could reduce and control it.”

“Student congress drafts a budget in the summer for the year,” Mullen said. “That money goes to student organizations, student leader pay for Student Congress, Campus Activities, the Collegiate, annual events, and services such as Orgsync and USA Today. Our bylaws state that a minimum of 35 percent of available funds go to campus activities.”

Any extra fees students pay for a specific class are set by the department responsible for that course.

“Lab and course fees are set by the individual departments,” Peterson said. “For example if you are taking dental classes, kits have to be bought for the students. That way the instructor knows every student has one and the right brand.”

“Or, if you are taking an online class, there are fees to maintain online equipment,” Peterson said.

We don’t make any extra money off of those fees, it just reimburses the college, Peterson said.

Although the technology and the records fee both go into the colleges general operating fund, they were both put in place for specific expenses.

“We have to have a records fee to maintain and pay for our record keeping,” Peterson said. “We send out transcript requests, do degree audits, and have to be able to cover the cost for our over 30,000 students.”

The technology fee was put in place in the mid ’90s to try and keep up with the rapid changing technology.

“We need to update and maintain computers,” Peterson said. “A lot of money is spent on annual maintenance, use of software, and to get new hardware.”

However, when looking at the big picture, these fees do not bring in a large amount to the general fund.

“The fees really only add up to about 3.5 percent of the budget,” said Peterson. “A majority of our money comes from tuition.”

The proposed budget for GRCC for 2011-2012 saw tuition bringing in a little over $54 million; the universal fees only make about $7.3 million.

The money allocated from the college fund is based on request.

“The president’s cabinet group will prioritize the request,” Peterson said. “Then we will take all factors into consideration and allocate funds for new requests based on what we consider to be the most critical.”

As of now it is to early to tell if tuition or the universal fees will be raised again next year.

“Our goal is to keep any increases as reasonable as possible,” Peterson said. “But at this time there is no way to know for sure what that will be.”