For former GRCC athlete James Wimberly, January 9, 2012 was the day his world was turned upside down.

“I was mad and confused,” Wimberly said when asked about his emotions the day the football program was canceled. “I was in the weight room when I found out. I was told it was happening but I was one of the players who didn’t see it coming.”

Now that the decision is final, Wimberly’s attention has turned elsewhere.

“Now I just need to find another home that fits best,” said the Michigan born Wimberly. “Because I didn’t qualify for a four year institution, I need to play at the junior college level. Currently, I’m looking at colleges in California and Texas and also Division 2 schools but the junior college route is my best option.”

Wimberly is not the only former GRCC player in this situation.

Cam Boyd was a freshman at GRCC last year and like Wimberly, he is also searching for a place to continue his playing career. 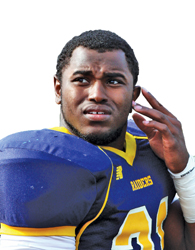 “I have to transfer to another community college,” Boyd said. “Iowa Central and Mt. San Antonio College in California are two of my options.”

The number one issue for Boyd was the timing of the announcement made by the college.

Boyd felt that although the school is doing what it can, it’s not what the players need.

“We really just needed a place to play next year,” Boyd said. “After the school canceled the program, there wasn’t much they really could do.”

Another GRCC player, Jason Embry, was a redshirt freshman this past season and is struggling with the decision of what to do next.

“It looks like I will be playing in either California, Iowa, Arizona, or Georgia,” Embry said. “The worst part of all this was the timing. If we had been told earlier, we could have transferred.”

Embry agreed with Boyd’s thought that the school can only do so much.

“If the school can’t find a place for us to play then they really can’t do much,” Embry said. “However, I am really looking forward to the player showcase the school is holding so I can show what I can do.”

The showcase, which is being held on February 18 at GRCC, is being organized by former Assistant Coach Curtis Andrews and will allow other schools to come and evaluate former GRCC players.

Andrews has been a part of the football program for almost a third of his life, both as a coach and player, but he has seen his job at the school change over the past months.

“As a program, we are still holding bi-weekly meetings to update our contact information, study table for the players and off-season workouts,” Andrews said. “We are doing off-season workout plans for the kids so they don’t waste time while still here. We don’t want them to miss a beat. Normally we would be in pads in the spring but we won’t do that.”

Along with keeping the players grades up and in playing shape, Andrews is also working on getting the former players into other two year institutions.

“I have sent a link to over 1,000 coaches around the country providing recruiting films and information about our players,” Andrews said. “As a two-year institution, we are used to helping athletes transfer to four-year schools. Now I am dealing with former rivals– teams I used to recruit against and am asking them to take our players.”

To Andrews, finding a home for the players is his mission but what happens in the future to the kids who no longer can play at Grand Rapids Community College is something he worries about.

“The program is going to be missed within the Midwest,” Andrews said. “I have players text me and say they don’t know what they would have done without Grand Rapids. With Harper College, Joliet College and GRCC being canceled, that’s 300 players who will need to find a place to go.”

“There are players that are okay but there are also players who are rough around the edges who we don’t know where they would have ended up,” Andrews said. “I worry about that part. We not only served Michigan but also Indiana and Ohio. I think that is the part that will be hurt the most. Grand Rapids Community College was a second chance to these players.”