This month and next November, Michigan and the rest of America will have to make a big decision: who will we be with for the next four years?   For most people four years is considered a long term relationship.  We will have to be able to trust the next president and develop a connection with him.  What better way to choose the next president than by having the United States participate in the Dating Game?

Today, we are lucky to have five eligible bachelors for the country to choose from.  Let’s see if America can find her Mr. Right.

Our first bachelor comes to us from Pennsylvania; this former U.S. senator has never been one to shy away from controversy.  He is a confirmed Catholic that has a strong religious base.  You can see this comeback kid grace the programs of Fox News as well as all around Washington networking with lobbyists.  Just don’t Google his last name.  Welcome, Rick Santorum.

The next choice is a former governor of Massachusetts.  This eligible bachelor has a stable income working in the private sector.  That means money, ladies.  He has consistent poll ratings, but that may be the only consistent thing about him.  He has been deemed a flip-flopper by some and a people-pleaser by others.  This attractive mannequin has a stable family life and is a devout Mormon.  He has advised several Republican candidates, including George W. Bush and John McCain.  Welcome, Mitt Romney. 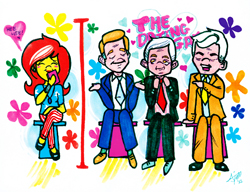 Our third bachelor is well known as a political power player.  As a former speaker of the House, he gained a reputation as someone who doesn’t hold back his feelings and is quite the scrapper.  There is no argument here; this intellectual has friends in all the right places, good friends with the means to help fund his expensive campaign.  This recognizable Republican figure has been plagued by personal problems.  But hey, if you can get three women to marry you while looking like a yard gnome, you must be doing something right.  Welcome, Newt Gingrich.

The next bachelor was an eleven-term Congressman from Texas, who some have called the Godfather of the Tea Party movement.  Although he wants to run on the Republican ticket, his politics are more in line with that of a Libertarian.  He is vocal against big government and is a strong supporter of deregulation.  With a strong army of support

from Paulidites, this long-term politician won’t go away anytime soon.  Not to be confused with Gollum from Lord of the Rings, let’s welcome Ron Paul.

Our final choice has quite the resume booster; his current occupation is that of Commander in Chief.   Like Ron Paul, he has a dedicated group of supporters, many of them his famous friends.  He is a smooth talker with all the right moves, not to mention a velvety voice.  This bachelor’s hair has been graying from stress recently, and his ears are comparable to an elephant’s. However, not a Democrat or a Republican can argue with his fit physique.   Bogged down by political and social turmoil, he is working to unite the separate factions in Washington.  Whether that’s optimism or a pipe dream, you decide.  Welcome, Barack Obama.

America: Let’s start with the economy. What are your plans to financially take care of us?

Romney – I know about money.  After all, I am a successful business man.  Good friends with Donald Trump, we have a lot in common.  Unlike my fellow Republican candidates, I have an actual 59 point plan to take care of America’s economic downturn.  Some of my plans will be to reduce corporate taxes, implement free trade agreements, and reverse any executive orders Obama made that favored organized labor.  Don’t worry. I want to take care of all you regular people–the ones who make a lot of money.

Gingrich – I may not yet have a plan set in stone, but unlike my fellow candidate, I am a workingman.  I have experience and I have been around the block.  America, I would like to sign a new contract with you.  And by the beginning of my second term in office, I promise that unemployment will be down and we will have favorable economic conditions.  My policies include repealing ObamaCare, replacing the Environmental Protection Agency, following along with Reaganomics, and starting to limit unemployment benefits to a generous four weeks.

Obama – Well, it was a group effort. My blue buds and I worked together.  We managed to turn jobs around, we’ve had growth, and the American auto industry is once again back on its feet.  Together, we can do more.  My future plans involve freezing annual spending for the next five years, replace trickle down economics with bottoms up, regulate institutions for what they do, not what they are, and bring hope back to the U.S. economy.  Together, everyone achieves more.

America: We’re not getting any older; how do you feel about marriage?

Paul – Marriage to me is a personal thing.  In my views, it should be between a man and a woman, although I cannot say that I would do anything to define marriage at a federal level.  States have the right to say “gay okay” or “gay no way.”

Santorum – Certainly, I do not believe that the states should be able to dictate what marriage is.  We’d have 50 different versions, and the only version I want to follow is one in the Bible.  Marriage is between a man and a woman, no ifs, ands, or butts…

America: Where would you take us on a first date?

Santorum – We would probably go to a nice Catholic church celibacy dance.  I would wear my nicest sweater vest and khakis.  If the night goes well, we could even end up holding hands during the jitterbug.  Just make sure your dress doesn’t match the colors of the rainbow.

Romney – I’d like to pick you up on a jet, and we’d fly off to one of the many countries in which I’ve invested.  You can watch me be the man in charge.  After a quick stop off at the country club, we could head to the local mall and see who can sit still the longest on the food court benches.

Gingrich – First, we could start the date off right by doing a little gardening. Then after we get cleaned up, we can head over to my friend’s mansion. The best part is that his yard is fenced in so the pesky liberal media can’t spy on us.  If you’re real lucky, we can even make a stop off at the moon. Just don’t get sick on our date.

Paul – I’d try to make reservations at a nice restaurant, but I’m sure they will remember I called.  Our back up plan will be to feed pigeons in the park and visit the Paulidites protesting.  We could end the night by catching Lord of the Rings at the movie theater.  We can sneak in the back to save some money.

Obama – It’s easy to say I could show you a good time.  We would have a good start off with dinner in the big white house, and then make a quick trip to the community center.  After signing some autographs, we will begin with the Karaoke.  I’m thinking a little Al Green.

Okay America, now it’s time to choose. Who do you want? Should he be poised, charming, cunning, real, sneaky, or optimistic? Or should you vote on the issues?  It’s time to turn off the TV and pick up a newspaper.  Don’t judge the candidates on looks, but rather the stances they take on issues.  Sure, eye candy is fun, but we don’t need fun.  We need someone who will get us on track, not a man who knows how to tie the perfect tie.