“Diversity is not the issue if community does not exist,” said Jeff Johnson in his lecture for the Diversity Lecture Series.

The journalist, social activist, and author of “Everything I’m Not, Made Me Everything I Am” spoke almost with a preacher’s enthusiasm about his belief that diversity is very important, but the fight for it “has stood in the way of community.”

When Johnson began naming off stereotypes of black, white, and Hispanic people, the audience laughed (which was his intention), and he mildly scolded them. 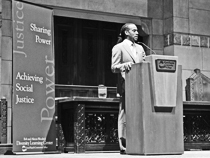 “These are things we say about people we know nothing about.” And he continued to stress that these thoughts are keeping people from celebrating diversity.

Johnson urged his audience to fight against the injustices of the world, and he also said it would not be easy. “Are you prepared to be uncomfortable? Are you prepared to have the mirror cast in front of yourself?” Because that is what it will take, he explained.

Johnson recalled a picture of a friend on the front of the school newspaper from his tenure as president of his college’s Black Student Union. The picture was of the “black homecoming” he had organized for the club.

Though the BSU members at the door thought Delassondro and the three busses full of his friends found the wrong party, when Jeff Johnson saw his friend and the group, he welcomed them and everyone danced together and had a great time.

“It was the personal relationship between Jeff Johnson and Pat Delassondro that served as an opportunity to build a bridge between two groups of students that would have never kicked it together,” Johnson said.

He explained that there have to be people like this willing to break boundaries and cross the lines, willing to let themselves feel uncomfortable if that’s what it takes to bring people together as a community.

“Part of being a real leader means you pass your community to the next generation better than when you found it,” said Johnson.