Co-creators JohnFollet and Ryan Koster have put in some deep, dark soul-searching time and they’ve come out the other side of the drainpipe with something wet, pungent, and itching to be shared with you.  Could it be the throbbing undead heart of K-Zoo out moonlighting in the buff?  Could something so obscenely honest as a mini magazine being published by local eccentrics be enough to deja do it for us and yank the power cord from collective backsides long enough to be honored in its virginal wake before the regular razzmatazz stoning must unflinchingly commence?

This past February11 The Strutt hosted the debut release of “Deja Vishnu” Issue 1, and saw a seething throng of people hastily shedding their grizzly bear garments like snakeskin to soak in the steamy zines and ghastly framed art while three ultra-wild bands kept a Benzedrine light-speed pace.  Here we were, swarming like a crash-course community riot not unlike the 616 Zine Sponsored “Hardcore-Fest” the night before in G.R. on Feb. 10, if not less specific.

The excitement had been squirming through the air like unseen asbestos to the point where when Kalamazoo cretins BLANK took the stage my eyeballs were shackled, veins and all, to the stretch rack of temporary distraction.  I was clawed back under unseen tiger paws to gape at the raw, humanoid glare of Katie Beery and Rosser Mulliners’ paintings of atrocities and tortures of the flesh while BLANK banged on in its furious car chase.  Soaring through their set they infused their holy rock blood into this forest of twitchy art I was immersed in with hypodermic guitar jabs.  As piles of zines got gobbled up by the rowdy and now dangerously close to nude crowd only a fool could restrain spasms of delight escaping from salt-shaking hips.  Hands embraced hips embraced skin on the run as feet kicked and pulses sped up their night jobs.  Hens clucked in Spanish, feathers flew as loose as morals, and before I knew whether I had been served my first honeymoon or was in needof awet nurse, Invisible Mansion were teleported to the shining center ring!

These Grand Rapids hooligans have been thieving the will of their audiences for years and leaving nothing but phantom clapping in their wake with deceptively simple instrumental melodies that broil over with sick and tricky guitar work. 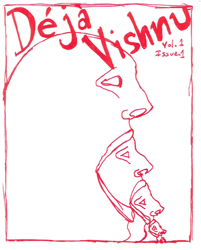 Ever diligent John on keys had me melted into the floral wallpaper with his subtle flourishes to Brian’s expansive droning sounds that clear the cobwebs of the conscience like a broom in an oil slick.  As stone-faced as Ralf Florian from Kraftwerk, John needled me into a stupefying poker move of submission.  His serene glow of the mystic emanated on tap and seemed to sweep the room with a hypnotizing paint brush propelled by the band.  Mick and Ivans’ interplay wove visuals into tangible light as the crowd and I developed a fine pair of goose-pimples as well as a dragons tail of more people, and before you could breathe there were enough reprobates to shake a stick at, creeping and pawing to belong under the silver cellophane stars that swung from the stage ceiling to the motion of the noise.

Mick, Ivan, the Pacic bros., and John pounded out thrasher after thrasher including a vigorously charged send-up of “Toredo” from the new P.V.C. H.EX. comp which only hinted at the ruthless annihilation to come in their soul massacring finale.

By the time John Follets’ band Everybody and their Empty Cups hit their place in the sun, I was a man without a country. Bent from the riders’ whips, I was picking up my scattered hide all over the busy coffee/bar with shaking hands.  My clothes were tattered rags of what they had been and I was blowing bubbles through a socket-wrench thing I called a mouth.

My fav perk about this Empty Cups ‘Zoo band was the guitars, if I had the sense to judge anymore.  My drool cup was full and the savage guitar rhythms made waste putty of any neurons I had left.  I was plumed to see Gabe from The Wrap, (a punky, hip-hop party band thats infamous for stripping to their briefs in the midst of lip-tripping).  Everybody and their Empty Cups was addictive and engaging enough to make the night a raging success!  The band played with their hearts on their sleeves, making clear what we were there for:  “Deja Vishnu” and its artists. Not only for sharing life’s battle scars so succinctly, but challenging others to pony up and create together.

Flipping through the welcoming pages of “Deja Vishnu,” you immediately fall under the web-like spell of its hallucinatory collages and handwritten poetic secrets which speak volumes for the zine and life because of their real and honest composites.  If you like to feel the heat of local spunk and scrappy wit pulsing like a Levis popsicle hunt down “Deja Vishnu” at their Facebook site and snap up a copy of this rad zine pulled straight from the howling crypt that most folks mistake for waste disposals nowadays on a tragic downward trajectory to oblivion!