“I laughed when you walked by,” says a man with apologetic eyes to GRCC student Rishelle VanDyke, the two of them standing in the hallway. “I was being stupid and immature,” he said.

VanDyke recalls hearing some people on the couches talking and laughing as she walked by, but she didn’t realize it was at her.

She smiles at the young man standing in front of her and replies with a simple, “That’s all right.”

“No,” he says. “It was wrong.” And he reaches out his arm to accompany his introduction with a handshake.

Though she was oblivious to the cause of the students’ laughter, she was delighted that the student was a kind enough person to admit his fault and offer a sincere apology. This optimistic attitude is one VanDyke carries through her everyday life, though it is hard at times being only 3 feet 6 inches tall.

From the time she wakes up in the morning until the time she goes to bed, Rishelle VanDyke must adapt to a world built for normal-sized people.
“I’m not less of a person. I still go to school, do my homework. I do everything you do. I just do it in my own way,” VanDyke said. 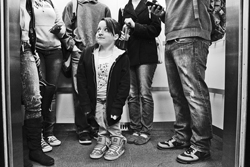 Just like everyone else, Rishelle has a daily routine, but hers is just adapted to fit her needs.

To reach the kitchen counter to make dinner or wash her hands in the sink, she uses one of the house’s two stools to give her a boost.

And then she carries that stool to wherever she needs it, including the laundry room, which is mainly used by her.

In the bathroom, VanDyke stacks the house’s second stool on top of a chair so she can sit while she gets ready for the day.

The daily routine of feeding her pet fish consists of her climbing on her bed and carefully leaning over to sprinkle food in the tank, trying not to fall over.

Even something as simple as getting into the bathtub is difficult for Rishelle. “I usually sit on the edge and just swing my legs over,” she said.

Where some may be frustrated, Rishelle has learned to accept her height and everything that comes with it.

She has heard of kitchens designed for little people, but she’s indifferent toward ever wanting one. “I’m so used to accommodating the world of normal-sized people,” she said. She says it’s not something she’s always wanted, partly because it would be more difficult for her loved ones to manage.

To the surprise of many people, VanDyke drives herself to and from school everyday.

“My grandpa works in a factory making petal extensions. I drive the van using the extensions, sitting on a booster seat,” VanDyke said. There is also a mechanism in the back of the van so her little red mechanical scooter, which she uses at school and other places that require a great deal of walking, can be easily lifted in and out.

People stare and do double takes all the time, especially in the store. “Little kids don’t really know any better,” VanDyke said. But adults stare too, and I just think it’s funny. My mom is the cocky one. She’ll stick her tongue out or say something smart.”

Rishelle would often work as a team at the store with her mother, who is the only other little person in the family. They’d step on shelves or knock down what they wanted.

VanDyke often confides in her mother about hardships she is going through because her mother has been in the same situations. For this reason, Rishelle feels the two of them have a strong relationship. She is the only other little person Rishelle has met.

VanDyke and her mother share the same type of dwarfism; it’s known as spondyloepiphyseal dysplasia (SED), which is a “term for a group of disorders with primary involvement of the vertebrae and epiphyseal centers resulting in a short-trunk disproportionate dwarfism,” according to the website Medscape Reference.

In VanDyke’s case, her body is proportional, except for her torso and legs. And she has no ligaments in her legs, which causes the knees to be more prominent than normal.

Her condition causes several health issues, resulting in VanDyke having already had six surgeries. Her dwarfism also causes her to have arthritis throughout her body, especially in her hips, so it is often difficult for her to walk long distances. She also has scoliosis.

But Rishelle doesn’t have to face her day alone; her boyfriend Mike Bugh is with her everyday. “I’m always here to help her,” Bugh said.
As someone who cares for VanDyke, Bugh wants people to be more aware of her, particularly in the elevator.

“When it comes to elevator situations, some people will see her waiting with her scooter, but they get on first,” Bugh said. “Then it’s too packed for her to get on.” He asks that people be more considerate in situations like this.

“The elevators are a necessity for some, so people should get off and make room for them. It’s a common courtesy,” he said.

Naturally, Vandyke found herself in many situations where she could not do what her peers did, but she continues to persevere to find her place in this world.

VanDyke remembers times from when she was younger—her normal sized sister was able to play soccer and participate in cheerleading. Rishelle watched her sister with excitement on game days, longing to be a part of it, but then she remembered—she couldn’t.

Now that VanDyke has grown up, she has come to accept who she is.

“Sometimes I get sad when I think about things I can’t do. But then I find something I can do,” VanDyke said.

Currently, VanDyke believes that place of hers in the world may be working with children in the same way she’s needed help. She is currently attending college for occupational therapy. “I really like kids, so maybe I could work with kids.”

Rishelle VanDyke has a smile and a light to her that many people of normal size may not understand. Her condition can make life more difficult, but that is part of what makes her who she is, and she understands that.

It only takes being in her presence to see the happiness she has inside despite her situation. VanDyke’s English Professor Steven Walters agrees. “Doesn’t she have one of the happiest smiles you’ve seen?” he said.

For someone who has every right to be mad at the world, Rishelle VanDyke’s content attitude is nothing less than inspiring.