After a week of clouds and snow, the January day ended up dazzling. The air is still filled with a chill, but the sun shines bright reflecting off the Grand River. The snow melted enough to reveal the green lawn in front of the Gerald R. Ford Museum.

These were the perfect conditions for a photo shoot. 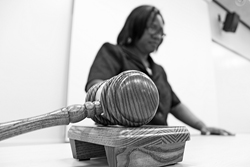 Tonja called to say that she was running late.

“This is what happens with a big family,” she laughed. “Going anywhere is impossible.”

“We still have one more coming,” Tonja said.

Tonja didn’t exaggerate, her family has numbers. She directed the group and gave full introductions.

Everyone was smiling, and excited to see each other.

Tonja’s mom and dad have adopted seven kids,  had one of their own, and participate in the foster care program. Her family is a mix of races.

Student Congress president Tonja Lofton was the only one to become a part of this family after the age of 18.

Capturing the closeness of this group was not difficult. However, getting everyone to stand still and stop laughing did present a problem. Young kids made goofy faces.  Her brother had a cheesy smile.  Her sisters kept changing their poses.

After the pictures where taken, the group walked back to the parking lot.   Tonja’s mom quickly mentioned how wonderful it would be to send these photos to her sister in Maine.

Beaming with excitement, her mom discusses Tonja’s upcoming woman of the year award; her dad just asks if he had to wear a tux to the event.

As the photographer and I left and drove out of the parking lot, the reflection of her family could be seen in my rear view mirror, long embraces and final laughs.

Tonja Lofton’s journey to this family and to GRCC is nothing short of extraordinary.  She faced unique hardships, and developed an admirable character that has led her to leadership roles and prepared her for the next step in her journey.

In the summer of 2000 Tonja Lofton suffered a debilitating stroke and she lost the ability to move the left side of her body.

Perhaps the worst aspect of her condition was that she did not even know her past. The stroke caused massive memory loss.  Personal memories as well as the ability to read and write were now gone.

Tonja spent the next five years living in an adult foster home, struggling to regain her life.

The experience taught her a lot. She saw people all around her giving up, she watched the news and saw a lot of personal tragedy.

Tonja made the decision that this would not be the end for her. Through painstaking physical therapy, she fought to slowly gain full movement of her body.

With help from the Literacy Center she learned to read and write at a high school level.  But that wasn’t enough for Tonja. She craved independence and an ability to be self-sufficient.  She felt she earned that.

To those who said she couldn’t, she simply responded saying that “can’t” is not a word she uses. This take-all attitude is what allowed her to leave adult foster care after living there only five years.

However, once on her own she soon ran into issues of employment.

“It’s hard for someone who is lost in the system, and who has limited reading skills, to be taken seriously in a job interview,” she said. She handed in application after application with no luck.

“I was a visual learner,” she said. “That’s just what I did; the problem was no one was giving me a chance to show that.”

With the encouragement of her tutor at the Literacy Center, she made the decision to start GRCC in 2007. There she would find the identity she was looking for and discover the leader she would be.

It seemed like a far off goal — graduating with a two year degree.

When her literacy tutor brought her to GRCC, she discovered that she had taken a class before her stroke, but she had no recollection of ever going to college.

With GRCC’s “once a student, always a student” policy, she was able to start school right away.

However, for Tonja that meant starting from scratch, and she ended up retaking all of her placement tests.  In many of the tests she scored below college level.

“I can still remember my first professors,” Tonja said. “They impacted me the most.  They laid a new foundation and helped me grow.”

She was an average student, As, Bs, and the occasional C.  But she worked hard for every grade she got.

“I couldn’t expect to be perfect,” Tonja said.  “But I can give all my effort.”

She still faced opposition though.

One of her English teachers assigned a fairly common assignment at the beginning of the semester:  Write about your high school experience.  Easy for most — impossible for Tonja.

“People will joke and say don’t you remember with wide eyes,” Tonja said. “The truth is I have no past.”

For the assignment the teacher told Tonja to make up her past.  She thought her problem was solved. The day she handed in her paper will forever be burned into her memory.

“You’re not college material,” said her professor, in front of the entire class. “Timelines don‘t add up.  Don‘t you know how to write?”

That day Tonja waited and was the last one out of class.  Later as soon as her car door shut tears flowed from her eyes.  She thought this was the end; she didn’t belong here.

She called her father, tears still coming heavily down.

Her father was furious.  He went into an over-protective mode, coming with Tonja to the next class, ready to confront the professor, but the professor never showed.

“I think he was truly embarrassed,” Tonja said. “I got a good grade in that class and none of my writing really changed.”

“Maybe he just had an off day,” said Tanja in her always present positive attitude.

Later in the semester the professor issued a public apology. That persistence and optimism has directed Tonja throughout her college career.

Then two years ago she made the decision to become involved.

For her first semesters she went to class, went to work and went home.  Like many students she was oblivious to the clubs and activities GRCC had to offer.

One spring day while heading to her car she looked down at the courtyard.  It happened to be Club Day.

“It was really the first time I noticed what was going on. I had been following this routine for so long,”  she said.

The first thing Tonja signed up for was student congress, filling an open seat.  That got the ball rolling for her. First a member, then vice president, and finally president.

“I love what I do, I truly feel like I am the voice for students,” Tonja said.

The woman who once believed she couldn’t handle getting a two year degree from GRCC will now be graduating with a bachelor degree in criminal justice, dually enrolled at GRCC and Ferris State University.

Future plans include getting a Masters in criminal law or maybe even higher education.

Christmas morning, Tonja awoke at her best friend Joy Voter’s house.  Joy’s husband rang the cowbell in their kitchen to let the kids know it’s time to come down.  The children came sprinting down the stairs and rushed to the table for their large holiday breakfast.

Tonja had spent the previous evening, snacking on trail mix with Joy and cracking up while they watched the Griswold family.

Gateway Community was started by Joy’s grandma and grandpa; her parents Kathy and Denny Bull are heavily involved with the church as well.

While volunteering at the church, Joy and Tonja developed a relationship that can be compared to that of sisters. It wasn’t long before Joy had introduced her to her parents, Kathy and Denny.

The Bull household became like a second home for Tonja; she spent most of the holidays at their house.

This Christmas though, she would be receiving the most precious gift of her life.

Underneath her best friend’s tree lay a gift Tonja had not expected. Tonja quickly tore the outer layers of the festive paper to discover a framed certificate.

The paper read, “Certificate of adoption. This certificate states that as of December 2007, Tonja K. Lofton has officially been adopted into the Voter-Bull Clan.  Hence forth she will be known as Tonja K. Voter Lofton Bull”

“The emotion was almost too much for me,” Tonja said.  “You don‘t have words to describe a moment like that.”

She described the experience as a blessing; she was now part of a family.

This will be Tonja’s last year here at GRCC, and her presence will be missed, but her legacy not forgotten.

This May, Tonja Lofton will be receiving the GRCC Salute to Women Award for her outstanding leadership, as well as her attitude and volunteering.

“What’s funny is I never saw myself being in this position,” she said. “Other people believed in me and I was inspired to work that hard.”

Her mentor and friend Tina Hoxie sees it differently.

“I know Tonja, she deserves this,” Hoxie said.  “She is truly a hard worker. I know whatever she chooses to do in the future, she will be a success.”

Her family will be in attendance at the ceremony, as well as friends and colleagues.

Tonja has now found the identity she craved. She has a family that has not only accepted her but welcomed her with open arms – friends who support her, and the drive to always be a better person than she is.

“Second chances don‘t come often,” Tonja said.  “I got mine, and I‘m not going to waste it.”