Electro-jam outfit, Lotus, is launching their 2012 tour and will be making a stop in Grand Rapids this month.

It’s been nearly two years since Lotus graced Grand Rapids with their blend of progressive dance beats, wailing guitar solos, and echoing synth.  At their last visit to GR for Founders Fest 2010, the band rocked Founders Brewing Co. and kept tipsy fans dancing into the night beneath the glow of the stage lights bursting from the mobile bandshell. 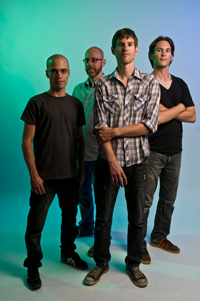 However, if you missed grinding on the sticky, beer soaked bricks of Grandville Avenue amidst a deluge of glow sticks a couple of summers ago, maybe you had the privilege of heading north a little ways to the little, wooded nook of Rothbury and caught Lotus at last summer’s “Electric Forest” music festival.  But if you’ve never seen Lotus, then now is the time.

“We have a mix of fans in Michigan that have seen us for years and years, and a lot of newer fans that are just hearing about Lotus.”  Miller said.

This February, Lotus will be playing at The Intersection and whether you’re a returning fan or a first timer, it will be the perfect show to kick the winter blahs.

Lotus is especially known for their live performances.  Lyric-less, jazzy, electronic grooves that keep audiences in a psychedelic trance and stage-shaking jams that crescendo to a pummeling explosion of light and sound are what keep fans coming back.

Despite being a regular on the US music festival circuit and leading the nomadic life-style of a jam-band that thrives on live shows, Lotus took some time out to work on their self-titled album, released last September.

“We did a lot more pre-production, really ironing out the demos and testing them live before taking them into the studio.” Miller said.

Lotus’ fourth full-length studio album showcases the band’s range of musical talent while taking noticeable steps in a more electronic direction.  The second track, “Blacklight Sunflare,” lets synth take the reigns instead of heavy guitar melodies and arpeggios, and features some impressive work on the keys.  “Bush Pilot” gets a little funkier with a blaring horn section and vocal samplings.

“I was trying to explore more hip-hop tempos and actually got some inspiration by going back and listening to old Wu-Tang tracks,” Miller said.  While many of the beats on tracks like “Blacklight Sunflare,” “Bush Pilot,” and “Dowrn” have a hip-hop feel to them, the track “In an Outline” takes a more progressive stance with some beautiful guitar solos.

The song “The Surf” certainly stands out among the instrumental jams on the album.  A cascading synth loop, reverby guitar riff, and driving chorus matched with mellow vocals during the verses makes for somewhat of a break from tradition for Lotus.

“I had written this song in a different version without vocals, but it just didn’t feel complete,” Miller said.  “It had more of a verse/chorus structure than usual.”

Whether you’re a fan or just now discovering Lotus, the only true way to experience their dynamic talent is to enjoy them live.  So be sure to stop out at The Intersection on February 15 or go to sectionlive.com for ticket info.