The Raiders opened the game on a 12-2 run in the first six minutes before Ancilla head coach Stephanie Beason called a timeout. Crisp passing and a relentless 2-3 zone defense allowed GRCC to jump out to an early lead.

“It was a good win and something we could build off with confidence,” said GRCC women’s basketball Head Coach Eric Taylor.

Ancilla has struggled throughout the season losing their 16th straight game and remained winless on the season. The Chargers suited up only six players for the game.

Katie Mitchell led the Raiders with 12 first-half points, 9 from three-point range. Tayityana Walker pulled down 12 rebounds in the first half. The Raiders led the Chargers at halftime 39-17. 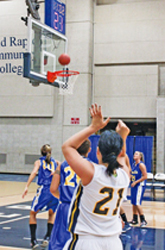 The Raiders came out after the half looking to put the Chargers away and not leave the door open for a comeback. The Raiders went on several scoring runs in the second half, and went on an 11-2 scoring run with just under 9 minutes left. From there the Raiders never looked back securing a win and a playoff spot.

The Raiders had four players in double figures. Mitchell with 14, Destiny Robinson with 14, Hailey Majewski with 13, and Caitlyn Patterson with 12.  Walker finished the game with 15 rebounds.

Brittany Cook led Ancilla with 23 points. The Chargers only had one other player in double figures, Rebecca Bunkowfst with 12.

“It was a good win,” Taylor said. “Coming down the stretch we’re playing pretty good collectively. It gives us some momentum heading into the post-season.”

The team looks to finish the season on a strong note despite losing to Jackson CC on Saturday, February 25, 100-77.

The Raiders have one game remaining against conference rival Lansing CC and it is home at the Gordon Hunsburger Arena on Wednesday, February 29 in the Ford Fieldhouse. Tip-off is scheduled for 5:30 p.m.