This past off-season, Maloley was honored for her 600th win receiving the Easton Victory Club award from the National Fastpitch Coaches Association (NFCA).

Maloley is preparing the team for a spring training trip to Clermont, FL, where they will compete against other community colleges before the season begins on Saturday, March 24.

“The trip will be about who’s going to get it done when we get back,” Maloley said. “Who’s going to be the best nine players we can put out on the field when it’s all said and done.” 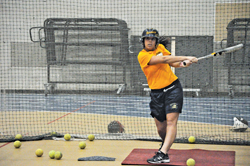 Last season, the Raiders made it to the regional finals, but lost to Kalamazoo Valley CC and Jackson CC, two of the Raider’s conference rivals. Despite the disappointing finish, the team had two players — Ashley Rapp and Adrienne Palmer, earn academic honors as well as All-Conference and All-State by the Michigan Community College Athletic Association (MCCAA).

The Raiders open the season at Jackson CC and will be seeking some revenge from its regional loss.

Each game of the season is a double-header, which will allow Maloley to play a lot of different players considering only three sophomores return to the team. The Raiders have 12 freshmen this season.

Sophomore First baseman/outfielder Brenna Donahue believes the team’s depth this season is a strength of the team.

“Last season we didn’t have as much depth with the team,” Donahue said. “This year we have two players at each position and I feel that is a big strength for us.”

The Raiders have been busy this off-season preparing with conditioning drills, taking batting practice, and working on fundamentals in the Ford Fieldhouse.

“We’ve been working on hard on defensive drills and we had some girls who can hit the snot out of the ball,” Maloley said. “We’re excited and can’t wait to get on the field”

The Raiders first home game is scheduled on Tuesday, March 27 at Belknap Park against Lansing CC. First pitch is scheduled for 3:00 p.m.