Throughout the years the dark, heights, germs, small spaces have created phobias.  There are even unusual fears such as Anatidaephobia, which is the fear that somewhere a duck is watching you. But one of the more wide spread fears is the fear that some sort of apocalypse will destroy mankind.  When George A. Romero’s “Night of the Living Dead” made its debut on the silver screen, it brought us something new to fear:  the Zombie.  But zombies are nothing new to society. Certain practitioners of Voodoo that dabble in black magic believe in things such as astral zombies. But George A. Romero brought us a new type of zombie to fear, which we will call the Hollywood Zombie. With this new fear brought us a new apocalypse to prepare for:  the zombie apocalypse.

•These creatures are far less intelligent than any person or animal you could find.

•They are slow, clumsy, and are so driven by the scent of living flesh that nothing else will distract them. Once bitten, you will inevitably turn into this not so cuddly individual.

•They have no defense but their bite and a tight grasp on your flesh, and no other desire but to gorge themselves. In addition to this, zombies do not feel pain and are not capable of any conscious thought.

Now that you know how to identify a zombie, you must now learn how to fight them. It is simple: destroy the brain. To do this, you must have a sufficient weapon. Here is a list of the best weapons to fight these deadly creatures:

Hand to hand combat weapon –Crowbar: this is the perfect weapon for combating our flesh crazed friend. It has a curved edge, so it is perfect for cracking a skull and destroying the brain. It is also much quieter than a gun; silence is a virtue in a zombie infested world. 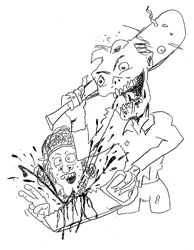 Close and Long Range Kills – Gun: a gun is a very effective weapon in the fight against the undead, but only if you know how to use it. If you have only had a few rounds in the shooting range, a gun will be almost useless to you. When faced with the undead, you must shoot in the head to defeat. So add in the fear of becoming a “human happy meal” with your poor aim, and you can kiss any hope of actually killing a zombie goodbye.

Zombie Group Elimination – Molotov cocktail: fire is always a good defense but only if used correctly. It is best to use a Molotov cocktail when hoards of zombies are in an open area. This is more of a weapon that should be used when not being attacked, but strictly taking time to eliminate our undead opponents.

But survival goes beyond using tools. We must take a look at how to adapt to their world. Here is a list of rules that you should follow in order to survive:

1)Lay low: One of the greatest errors you can make in the Zombie Apocalypse is allowing the zombie to locate you. They still retain the ability to hear, so any noise that you make will bring a zombie stumbling to your feet. It is essential, especially when the Apocalypse first begins, that you  stay undetectable by the undead. If possible stay in hiding for approximately three weeks. This will give time for the chaos to settle. If at all possible, stay away from populated areas such as urban settings. Wooded areas are better for shelter and will also give you extra protection.

2)Locate a Weapon/scavenge for supplies:  If you have not already done this, finding weapons, clean water, food, medical supplies, and fresh clothing are essential.

3)When in the Zombie Apocalypse, do as the Zombies do: Another crucial key to surviving is blending in with the zombies. In season one of the show “The Walking Dead,” two of the characters were able to cover themselves in zombie entrails to give them the scent of a corpse. The reason for doing this is that just as we can smell the rotting flesh of a zombie, zombies can smell our clean, living skin. Make sure that when doing this, you keep any actual zombie bits and pieces out of contact with your flesh. Just as in “The Walking Dead,” and even “Shawn of the Dead,” to some lesser extent, you will be able to walk freely with your undead peers. This strategy will come in handy in the never ending search for supplies, weapons, and survivors.

The final step to surviving the Zombie Apocalypse is by far the most challenging.

4)Rebuilding: Once the Zombie Apocalypse starts, it will never truly end. But at some point, you must try to find a group to survive and rebuild with.  The line that separates the zombie from a human is thin.  The only thing that truly separates us is our humanity.  Though it isn’t possible to know when things in this world would come to an eerie calm, the time will eventually come. When it does, rebuild with a group of people, find a shelter that can be secured, stock up on supplies, find consistency, and cling to it. If this cannot be done, than any steps taken up to this point are rendered useless. “Love and compassion are necessities, not luxuries. Without them humanity cannot survive.” – Dalai Lama