While waiting for the traffic light to turn green, the GRCC student sat in his car soaking up the nice weather.

He began to daydream about summer, the warm weather and the beach.

The driver pushed on the gas, rounded the corner and headed up Fountain St. Before he had reached the speed limit, the driver found himself staring down two skateboarders carving back and forth down the Fountain St. hill, in the wrong direction.

For Grand Rapids Community  Campus Police Chief  Rebecca Whitman, and her officers, this situation is not uncommon, even though skateboarding isn’t allowed on or around campus.

Whitman said that the boundary is the central business district, which is from I-196 to the north, Cherry St. to the south, Lafayette on the east, and the Grand River to the west.

Although GRCC does fall in that area, GRCC’s Campus Police are still dealing with skateboarders and long boarders now that the weather is nice. 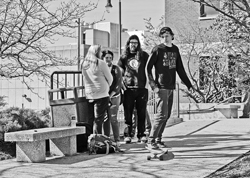 “The biggest issue is skateboarding in the ramp,” Whitman said as she explained possible offenses. “It comes down to two offenses if you are caught skateboarding on campus. Skateboarders can expect to get a prohibited skateboarding ticket or a trespassing ticket which is a misdemeanor.”

“The main reason is the amount of pedestrians and the lack of respect by skateboarders,” Whitman said. “We strongly recommend that skateboarders stay out of the road ways and be respectful. We are less concerned if they are respectful when they are on our borders.”

Cody Egan has attended GRCC for two years and during that time he has used his skateboard to get to and from school on many occasions.

“My skateboard is sometimes a mode of transportation for me,” Egan said. “I was riding my skateboard on campus over the summer and was stopped by Campus Police.”

Although only given a warning that time, Egan admitted another time when he was stopped and almost had his board taken away but instead ran from police.

Luke Speas, who recently came to GRCC from Spain, is another student who uses his long board as his way of going to and from school. For Speas, who doesn’t have a drivers license, his long board is his main mode of transportation to campus and around town.

“Long boarding is my main source of transportation,” Speas said. “I don’t have my drivers license yet, and I can’t afford a car right now, so my long board is like my car when the weather is nice.”

Speas has only been stopped one time during his time at GRCC and it was during the first week of class.

“I do remember that on my first week of classes, a GRCC police officer told me that I can’t long board but since then I haven’t had any trouble,” Speas said. “I think Grand Rapids is a beautiful city to long board in and I try to enjoy it as much as I can.”

Speas feels that although it is dangerous at times, it should still be allowed.

“I don’t think it shouldn’t be allowed,” Speas said. “If long boards, that are harmful aren’t allowed, then cars should be totally prohibited. I believe that cars are way more dangerous than long boards. I don’t understand why long boards or skateboards aren’t allowed, that doesn’t make too much sense.”

For those who use a skateboard on or around campus, along with a possible ticket, skateboarders can also expect to have the skateboard taken away although they can eventually be returned.

Whitman explained that although ticket numbers are not as high as some years, the main reason is the high number of warnings given instead of tickets.

“Skateboarders need to be respectful to officers when confronted. You are better off just complying,” Whitman said.