By Lizz Vensas
Staff Writer
This is going to be a hit movie.  Regardless of my review, this will be a box office success and you can thank one major age group… tweens.  That golden age before puberty, but after you start to discovered that you like nail polish and he likes video games.  The down and dirty truth is that the tweens are not far off on this one.

“Hunger Games” is an adaptation of the hit book series by Suzzanne Collins. The series includes three books, this being the first installment.  At its core, this is not a love story. Twenty-four kids are fighting to the death in an arena, being nationally broadcast for the entertainment of members of the capital city in a futuristic dystopian world.  The Games are a way to remind the less fortunate of their place in society.  The series follows the adventure of Katniss Everdeen and her struggle to save her sister and get out of the arena alive.

For those of us that read the books, we could not wait for this movie to come any sooner.  The bummer is, within the first five minutes into the movie a major side plot was taken out.  It is never  properly explained why the Mockingjay bird or pin was so important.  In my opinion, the major symbol for the book series and movie was not given justice.  Other small plot changes did occur, but nothing major that wouldn’t have been expected in a book to movie adaptation. 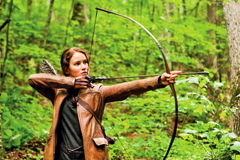 My only other beef with the movie is that the character of Katniss was not given any ability to voice an internal monologue.  In the book, she struggles with even having emotions, and not just focusing on survival. That said, any scene where Katniss touched Peeta, her potential love interest, was turned into a 13-year-old girl’s dream come true.  To me it turned a movie that would appeal to all ages and both sexes a little bit sappy.

On to the good now: visually this is going to be one of the most exciting movies of 2012.  The capital and the outrageous fashion of its citizens were brought to life with excellent set work and CGI.  The capital, known for its advanced technology and complex architecture was given the proper attention it deserved.  Expect to be assaulted, in a pleasurable manor, by the bright hair colors, awe-inspiring outfits, and unbelievable landscapes.

The gaming arena was also laid out in a spectacular way.  Creating a world inside of a world is no easy task.  Director Garry Ross brilliantly brings the game arena control room to life, something never fully described in the book.

Overall, the acting was great.  Each actor melded seamlessly into their character.  Wardrobe and make-up did an excellent job making several well-known actors unrecognizable.  Special shout-outs have to go to Elizabeth Banks, Stanley Tucci, and Woody Harrelson.  The less known actors performed as well as their counterparts.  Jennifer Lawrence made an unbelievably convincing Katniss.  And ladies, the two male leads, Liam Hemsworth and Josh Hutcherson, were also cast to satisfaction.

The verdict?  If you read the book, go see the movie. Even if it is just to watch your favorite characters visually come alive.  It is worth going to see for the amazing job that was done in character and landscape interpretation.  If you haven’t read the book, see the movie.  I do believe this series is more versatile than it is given credit for.  It has mass appeal, and will be around for quite a while.

My advice however is, wait until the hype dies down.  Go in a week or so. Nothing ruins a movie experience more than sharing the space with a hundred tweens.  I do imagine though that any movie can be negatively impacted by hearing the 11 year old boy behind you bragging to his friends that he is drinking popcorn butter, straight up, out of the cup.