Reality TV has become a fact of life.  Like drinking during happy hour or paying rent, it has become unavoidable.

Sure, it can be a great guilty pleasure.

Some weeknights I will close the blinds to my apartment, turn off all the lights, take the phone off the hook, and put on some old episodes of Jersey Shore, not ever to be considered good TV, but an excellent time waster.

However, the amount of reality singing competitions has become ridiculous.  There is no guilty pleasure in that; it is just mind numbing. 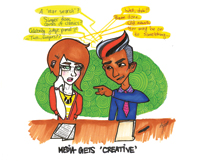 Another singing contest is about to be added to the TV schedule.  The Fox show “Duets” is set to premier this summer.

The motto of the show being, “Two is better than one.”  How lazy have TV executives become?

With judges like Kelly Clarkson and Lionel Richie, Fox hopes to draw in crowds.

What has happened to scripted TV,  dramas or comedies that carry out the wit of seasoned writers or the creativity of new voices?

Perhaps I am bitter because I have been forced to sit through these shows year after year.  My mother, a very intelligent teacher of 30 years, is an “American Idol” junkie.

Season after season, she has been a devotee to this fad Even though these shows have started to become monotonous.

All of these talent shows have the same basic formula:  three to four judges, usually overexposed celebrities whose careers have lost traction plus a B-list host, plus  desperate wannabees, plus commercial suspense for some flavor.

Stir quick with messy speed and bake till cheesy.  Oh, and of course, don’t forget to garnish with horrible tryout videos of disillusioned people who know how bad they are but refuse to give up.

I still have PTSD from watching William Hung’s cover of Ricky Martin’s “She Bangs” music video.

When “American Idol” first came out, it was innovative and interesting.  Finding a star on live TV, being able to vote for your favorites, it WAS epic for about the first three seasons.

Then the concept became over-saturated.  How many Idols can you churn out year after year?

Some idols have been successful, but it is arguable to say that any of the winners have truly taken over the charts, and half of them are not even relevant anymore.

After American Idol came out there was a new rush for contestant reality TV shows, like “Married by America” and “America’s Next Top Model.”

It seems like America had seen an onslaught of these “talent” shows in the last couple years.  There is “American Idol,” “The X Factor,” “The Voice,” “America’s Got Talent,” “The Next Country Star,” and “Sunday’s Best.”  I believe P. Diddy also jumped on this band wagon when he tried to start a boy band search on MTV.

I don’t think that the contestants’ dreams are inconceivable, but going on these types of shows is probably not always the best idea.

Most contestants have been delivered to the American public in cheap cookie cutter form.

To me, there is nothing like discovering a new artist that pops into the mainstream, not one that has been covering songs for most of his/her career on a TV show.

Let’s go back to the era when we didn’t rely on these cheap cop-outs of television shows.  Give me a classic “Seinfeld” comedy or Rachel and Ross love story.

I want to think about what I am watching, instead of being force-fed this drudgery by the top networks.

I have a message for the big networks and my mom: the “singing competition” dish is overdone.