The Culinary Arts department will hold the grand opening to announce and dedicate its culinary amphitheater on Thursday.

This high-tech new classroom renovation was funded with approximately $765,000 in donations and other funds raised by the Culinary Arts Department.

The culinary amphitheater holds 54 people and is the equivalent of three labs.

The space is “primarily for teaching and demonstration in the culinary field,” said Dan Gendler, the program’s director. “It’s a classroom first.”

It is also going to be used for as a venue for GRCC cook seminars, famous chefs, fundraisers, and good and bad pairings of food and wine.

Stairs going up the sides of the room, the large kitchen with full appliance access, elevated seating and surrounding mirrors make the amphitheater a true representation of a professional culinary department.

“This room, of it’s type, is one of the best in the country,” said Gendler. “The CIA (Culinary Institute of Art) in Graystone, Calif. that is thought of as the premiere culinary location does not have a room that is better than that.”

The upcoming events being held in the culinary amphitheater are: 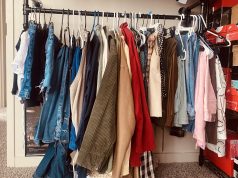