The Grand Awards are an awards ceremony where outstanding work in Grand Rapids theater productions for the previous year is recognized. The ticket proceeds go toward a theater scholarship fund, and this year, the four students benefitting are  Aaron Guest, Mary Lehman, Joseph Becherer and Jacob Loader.

GRCC student Kyle VanDyke won an award for the category “Outstanding Lead Actor in a College Production.” “’T Bone n’ Weasel’ was only the second play I’ve ever acted in,” VanDyke said. “So to even be nominated for this award was quite a surprise to me. Also, it was very humbling to be nominated with some very talented actors from other colleges.”

Micah Hazel from GRCC won an award in the category “Outstanding Supporting Actor in a College Production.’ Hazel was very happy and pleased. “When I won it felt like I was validating the theater program,” Hazel said. “It was so cool and surreal. I feel like it’s a symbol of completing the course.” 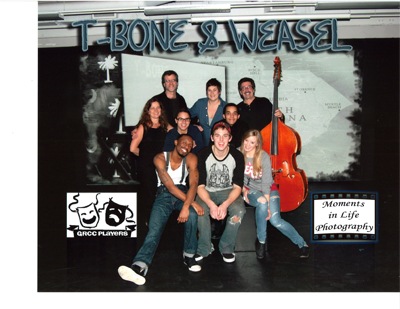 “I was super proud of the boys,” said Erin Cullum, director of “T Bone n’ Weasel”. “They worked really hard, had such energy and passion for the play. It was an honor to be recognized by the Grand Awards committee”