Each year around Halloween, millions of people decide to bring fear upon themselves. This fear is created by people like James Burns.

At the age of eleven, Burns knew that he wanted to bring fear and enjoyment to people’s lives, and he is now accomplishing that dream by organizing the haunted house known as “The Haunt.” 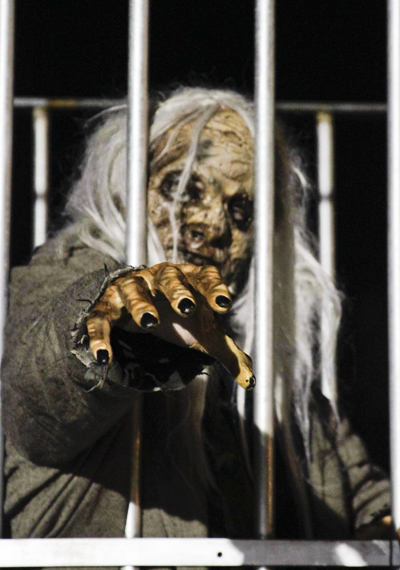 Since opening in 2001, “The Haunt” works all year to deliver the best experience possible and has grown to be one of the best scares in Michigan. Upon stepping inside, one can hear the screams of frightened teens. The waiting area consists of ghouls walking among the crowd, and if you wait long enough, you’ll be treated to a dance of the dead. There is never a dull moment.

“We get inside your head and you create your own fear,” said Burns. “We never give your mind a chance to adjust.”

“The Haunt” gives multiple options this year, with the addition of Monster Paintball. If the main attraction isn’t enough, you can go into the Dark Maze to get lost with a chainsaw wielding baddie, or go into Terror Town 3D with the clowns.

“This job is never boring. We work year round,” said Burns. He’s already started work for 2013.

Each room holds a new terror with attention to detail, from dangling rusted chains to bloody operation tables. Some people might be afraid of hospitals, others a forest and others the idea of being lost. Each room poses a unique threat, and there are a lot of rooms.

“The Haunt” even has people working behind the scenes to deliver the best scares. Using cameras, an employee can watch for people to walk into a target zone to activate a loud noise or any other terror they want to create.

With each new year, “The Haunt” gains many new fans, and there are many who just keep coming back. “Our goal is to continually reinvent ourselves,” Burns said.

Fear sells, and “The Haunt” capitalizes on this by delivering what thrill seekers want most.

“The goal primarily is to scare you, but if we can’t do that, we’re going to entertain you, and we do that better than anybody in the area,” Burns said.