The Raiders came out of the gates sluggish, turning the ball over on their first two possessions, but quickly pulled it together.

Aquinas College jumped out to a 5-0 lead, but Raiders answered back by scoring six straight baskets to take the lead. The game was back and forth, neither team giving an edge in the first half. 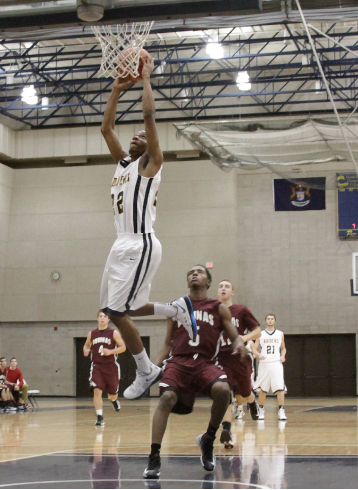 The Raiders smothered Aquinas on defense, forcing turnover after turnover. The Raiders held a two point lead at halftime 35-33.

The Raiders did just that going on a 20-7 run to push the lead to 55-40 within the first five minutes of the second half. Their defensive intensity increased, and the Raiders piled up steal after steal. The Raiders finished the game with 17 steals. The defensive outbreak allowed the Raiders to get out into transition and control the tempo of the game.

“We just picked up the defensive pressure in the second half,” Carnegie said.

The Raiders bench helped wear down Aquinas by scoring 41 points as a unit. Freshman Chris Mickey led the way with 17 points off the bench. He was also the leading scorer. Sophomore Alex Mustert chipped in with 10 points.

“We need to work on our free throws and our consistency,” Coach Carnegie added. “We have a lot of freshmen, and we can’t afford to go on a roller coaster ride”.

The Raiders will face Indiana Tech Saturday at 1 p.m. in hopes of adding another “W” to the win column and improve to 2-1 on the season.