After a challenging campaign, President Barack Obama emerged the victor and is receiving mixed reviews from voters.

“You don’t have people fired up,” said Sawall. “There weren’t those emotional issues as there were last time.” 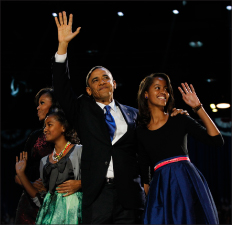 Sawall said that in the last election, a lot more people really stood behind Obama, but this year, it wasn’t quite the same.

“It was an ‘I-don’t-like-that-guy-so-I’m-voting-for-the-other-guy–election.” He said people didn’t necessarily vote for their candidates because they supported them but because they did not support the opponent.

But whether or not people were excited about his reelection, GRCC students and the people of this nation will be affected by the president’s stances on issues. GRCC students spoke out about their reactions to this election’s results.

Kyle Brethauer, a GRCC student and also president of the GRCC College Republicans, is disappointed with the outcome of the presidential choice, but doesn’t consider the election a total loss.

“A lot of people put a lot of hard work and time into this campaign,” he said. “We were excited the proposals were all rejected.”

GRCC student Alex Thorsen, 26, of Ann Arbor, said he is against bigger government and would have also preferred the Republican candidate.

“I’m against this push to give everyone something rather than having them work for it themselves,” Thorsen said.

On the other hand, GRCC student Jared Navarre, 26, of Stanton, is happy with Obama’s win.

“I think he understands the importance of education in general,” he said.

Another student, Timothy Belanger, 18, of Wyoming, was on the fence during elections, but is happy Obama’s in office.

“I just feel a little bit better with the whole gay rights movement,” Belanger said. “There’s so much hate going around. Hopefully this will allow everyone who is insecure and afraid to ‘come out of the closet’ be more confident with themselves and be able to express themselves the way they want.”