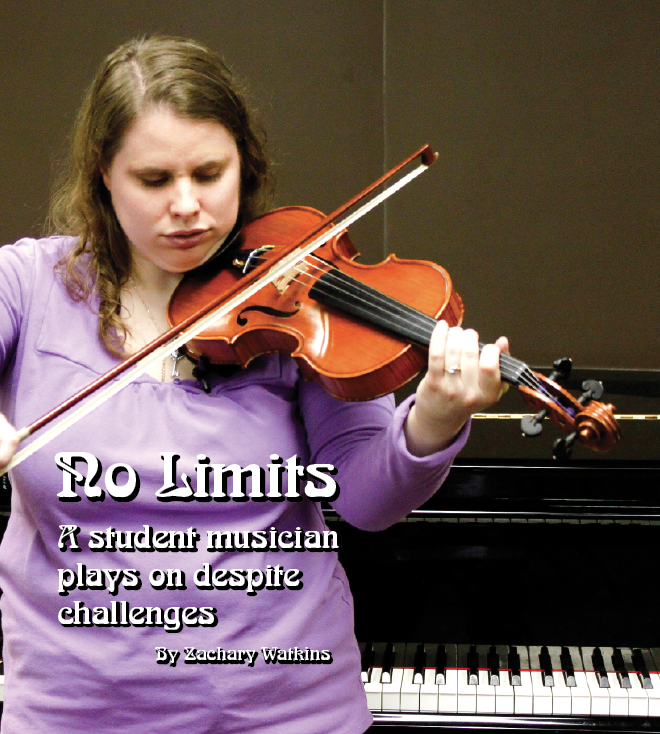 A Grand Rapids Community College student has just finished prepping her violin. She begins to play a beautiful Scottish fiddle tune called “Ashokan Farewell.”  The vibrant sound of the song matches the personality of the performer. Her name is Sarah Stanford.

After Stanford,  plays a couple more songs she grabs her cane,  puts the red end to the floor, and leaves the practice room, using her cane to guide her way. This is normal life for Stanford. She was born blind.

Her parents are passive carriers of a genetic mutation which caused the blindness in Stanford and her brother, Nick, 21, a student at Western Michigan.

“It’s called Leber’s Congenital Amauroses. Basically, the bottom line is that my rods and cones did not develop correctly, so that is what caused my blindness. I at least have some vision, like I can see that the lights are on, and that there is a desk to my right and left, and I can see you in front of me. I can tell what is around me by the way that they (objects)  are shaped. Detail is my struggle.”

Some may wonder how Stanford is able to do all these things. She credits her mom with prepping her to be as self-sufficient as possible.

“My childhood involved my mother sending me to every single place on God’s green earth,” Stanford said. “She sent me to a lot of camps that taught me independence and that put you around other people who are blind like myself. My mother knew that it was important for me and my brother to do these things, even though my brother kicked, screamed and cried. I didn’t kick, scream or cry.”

Stanford is pursuing a Human Resources Management degree and is plans to transfer to Western Michigan University. Writing assignments are not a problem for Stanford, who manages a 15-credit course load. She has written many essays, writes short stories and even writes music for the piano.

“I have a screener on my computer called “JAWS” (Job Access With Speech), and basically, it says every single thing I type,” Stanford said. “Everything. It reads off all the letters, and I can have it read sentences to make sure it sounds all right. I can easily go into Microsoft Word and write anything.”

Her screener can do more than just read her papers.

“It reads my Facebook, my email, my everything. I’ve even created Powerpoint presentations on here before.”

Stanford has many friends on campus and values the mentorship from her Spanish 102 teacher, Terry Monoyios.

“I trust this guy with my life,” she said “ He’s all the way from Greece, and he teaches Spanish. The guy is a mastermind. I always sat in the front of his class because I was captivated with what he was teaching. The guy went the extra mile for me every time.”

Monoyios remembers the first day she was in his class.

“I have a sister with scoliosis, so I guess I have it in my heart for people like that–someone with disabilities,” he said. “I just see past it. It was the first time in my career I had a blind student. She sat right in the front.”

After having Stanford in his class, Monoyios said he has much admiration for her.

“She inspired me to be a better professor in the long run. All she needed was a little extra help. I helped with what I could, and she came through with flying colors.”
Stanford also gives credit to her boyfriend, Jesse Silcox, 21, also a GRCC student, for helping her succeed.

“I met Jesse in seventh grade at Newhall Middle School (in Wyoming),” she said. “He’s one of the few people who looked past my blindness. He pushes me with my music and just supports me with whatever is going on in my life.”

Stanford has a wide variety of hobbies.

“I love swimming. Put me in water, I am like a dolphin. I won’t want to get out. I also am a member of GRCC’s Christian Fellowship, and I enjoy writing music and short stories.”
She is a devout Christian, and it plays a big role in her life.

Not only does Stanford write her own music, she is a talented violinist,  piano player and singer.

“I began singing at 3, playing the piano at 7 and violin at 10,” Stanford said. “I have written nine pieces for the piano, and I have them all stored in my head. My violin is actually an interesting story, because one day, my parents just brought it home and handed it to me. I opened the case and found out it was a violin and thought ‘What? When did you want me to start playing this?’ With singing, it just sort of happened. My mother put me in the church choir when I was a kid, and I still sing with them to this day.”

When playing her violin, she tends to stick to one genre.

“I love playing fiddle tunes,” she said.” I love playing the faster, upbeat Scottish songs. They’re just so much fun. Irish tunes are similar, and I enjoy playing them just as much.”
When she’s not singing in her church choir, “David’s Harp,” on Sundays, one of her favorite songs to sing is “Bridge Over Troubled Water” by Simon and Garfunkel.

“Oh my gosh. I love them,” she said. “I also love the Beach Boys. Their falsettos are amazing. It seriously stresses out vocals chords so much. That’s why it’s so impressive. Simon and Garfunkel are probably my favorites. I just love them so much.”

When asked about her musical talent and where it came from, Sarah said, “Don’t ask. I honestly do not know. All I do know is God gave this gift to me, and I’m going to use it.”

When it comes to her piano, she has many favorite songs she enjoys playing.

“I like playing a lot of my own compositions. I enjoy playing Christian music, and I’ve learned a lot of classical pieces. They’re still a little bit hard. I just have to slow it down.”

Despite how others may view the idea of being blind, Stanford sees it as a gift.

“I feel like it’s a blessing, because I am able to show other disabled people that they can do what they want as long as they put their mind to it,” she said. “It has allowed me to become a good judge of character and view the inside of a person and not judge them by their looks.”

Out of all the people that keep Stanford driven in life, she mentioned two people in particular who have been the biggest inspiration.

“My family members inspire me to keep going,” Stanford said. “Especially my mother and grandmother. They push me with God and to give me control of everything in my life.”

Stanford offers this advice to others:

“Live life to the fullest,” she said. “Give everything over to God…God gave me the faith to teach others that they can live without one of their senses, although it’s difficult.”