In the wild, you have two choices, to be the hunter or the prey. The CW’s strategic reality show, “Capture” featured the sibling dynamic duo, James and Rebecca Wallington, formerly of West Michigan. Working together, they acted as both hunters and prey as they fought to win a $250,000 grand prize.

James, a 2009 graduate of Grand Rapids Community College, and Rebecca, a senior at Michigan State University, competed as a team on the show that first aired July 30, with 12 teams of two, but now only four teams remain.

Each week, a single team has a maximum of two days to hunt and capture two other teams within a 400,000 acre forest to avoid being eliminated.

While on the show, teams use the supply station, where they are given food and other necessary items, but are otherwise forced to rely on survival skills for other resources.

Every episode gives viewers a taste of two four-hour hunts, crunched down into an hours’ time.

The hunting ground may not be deadly, but it is treacherous.

Food and water are scarce, while time and rest are rare.

James said he and Rebecca had an idea about what the show was going to be like, but did not expect the extreme conditions they were going to be thrown into.

“We knew it was going to be tough, but with the first 24 hours of the game starting with rain and hail, I think every team learned quickly that we were in for a wild ride”.

Teams are constantly on the move, in hopes of hiding from or catching other teams.

The Hunters use strategy and GPS technology to track down the other teams, while the prey use high tech gear that forces them to always be on the move.

When it comes to elimination, if two teams are captured successfully, the remaining teams vote to eliminate one. If the hunting team only captures one team, they become the second team up for elimination.

If the hunting team fails to capture another team within 24 hours, they automatically are the team eliminated.

Although, James’ and Rebecca were the fifth team to be captured and their wild journey came to an end, the Lime team didn’t go down without a fight.

The last few days of the Lime Team’s journey on the show, “I was very dehydrated which caused a lot of physical limitations to our game,” James said.

He said, his body was giving out on him, but mentally he was stronger than ever and wanted to keep pushing himself. 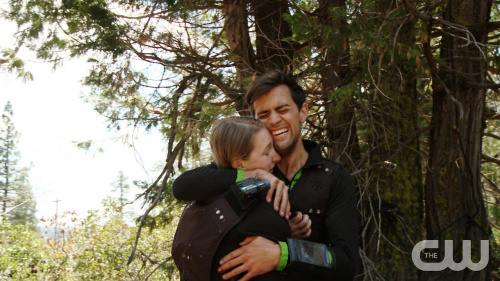 Due to his condition in their last episode of the show, the dynamic duo made the decision to go to the supply station, where they could get food and water, which ultimately led them to getting captured. However, it was a risk they were willing to take since food and water are so vital in a survival situation.

“Dehydration was no joke out there in the forest,” James said.

Through this life changing experience, James said, “I learned that I’m a lot stronger than I give myself credit for and that my sister Rebecca and I make quite the team.”

Since the age of 13 James’s dream has been to be on a competition reality show and to share the experience with his sister was the “cherry on top,” he said.

This experience also did wonders for the sibling’s relationship. Since they were disconnected from the outside world, they only had each other.

They were forced to solely rely and lean on each other every step of the way.

Leaving the forest behind, the lime team went out with a “no regrets” mentality. They stuck true to who they were and grew stronger in their relationship and James said, “that is more special than anything”.

Besides his recent fame on reality television, James is currently enjoying life in Hollywood, and he is also a host on AfterBuzzTV.com.

Rebecca is attending MSU and applying to schools to pursue her master’s degree.