(From left to right)Dani Vilella, Jessica Krebs, Arielle Brown, and Rebecca Whitman sit on a panel at the first Women in Leadership Summit.

The first Women in Leadership Summit, hosted by Women’s Issues Now (WIN), kicked off this morning at Grand Rapids Community College with a rather small turnout, consisting of approximately 20 attendees.

Students, staff, and the public all gathered to witness strong influential females in society give their take on important issues that affect women today.

Two of the guests, Anita and Kristin Moore are sisters from Grand Valley State University looking forward to learning vital information from this diverse group of women.

“I’m a Grand Valley student with a finance and economics major, I am hoping to pursue a Master’s degree in public policy and a particular passion for gender studies so I thought this was the perfect place to be,” said Anita Moore.

Kristin Moore was especially looking forward to meeting and connecting with other women who are in leadership. 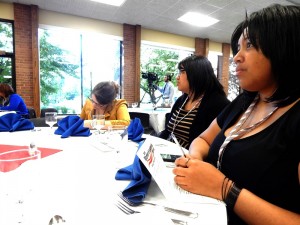 “I want to meet other women who have led the way for us to go into the leadership field and also to just learn the struggles other women have to deal with,” said Kristin Moore.

The summit started a little after 10 a.m., with a welcoming from Ross L. Pike, President of Women’s Issues Now (WIN).

The first hour of the summit, the discussion was titled Leadership is Diverse, Sometimes Barriers Must Be Broken.

The panelist included six women, ranging from a GRCC student to the campus police chief, all giving their input on different barriers women face in society.

The topic of discussion was most fitting for the panelists due to their own breaking of barriers within their expertise.

“I think one of the challenges of doing activism work and leadership work and becoming a leader as a woman in the community one (of) the things I’ve had to overcome was youth,” said Dani Vilella, field organizer for Planned Parenthood Affiliates of Michigan, explaining that that younger people are not always given leadership roles right away.

“It can be very challenging being a young person trying to break into leadership roles, a lot of more traditional leadership positions, certain types of boards, you need to be influential in a particular way,” Vilella said. “Being able to contribute in particular ways, in a lot of ways dealing with money. When you’re young that’s not typically a resource you have.”

GRCC Police Chief Rebecca Whitman said, “Another thing that is a barrier, especially for young women going into nontraditional roles, is your own self confidence.  Don’t let that get in your way, surround yourself with positive people but make sure you stay positive  and driven.”

When asked why being a leader is important, Arielle Brown, president of GRCC’s Black Student Union, said her inspiration stems from her mother.

“When I was younger, my mom was a leader to me,” Brown said.

“It was important for me to become a leader, more specifically in college, because I have younger cousins, who are looking up to me and have no (idea) what the real world is like outside of our neighborhood,” Brown said. “I want to show them that I’m a leader and hard work is paying off.”

The discussion went smoothly with all the panelists sharing stories and giving their input on the barriers they faced, different obstacles they face, and  the steps they took in becoming a leader. 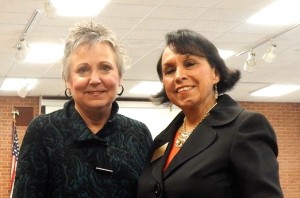 “What got me into this position was hard work and mentoring others to follow me,” said Lupe Ramos-Montigny, State of Michigan Board of Education Member.

Deb Bailey, a GRCC Board member and the director of Global Corporate Relations for Steelcase, gave this vital tip on being a leader: “If you show up, do what you say you’re gonna do, you’ll end up being an officer or being on the executive committee.”

Whitman described how taking risks is ultimately how she ended up in her position.

“I never wanted to be a Police Chief, yet I am,” she said. “That was never the ultimate goal of mine. When I started police work I wanted to be a street patrol officer. When the testing came up, again, it’s one foot in front of the other. ‘Okay I’ll take the test, I don’t know if I’ll pass, I’ve only been here five years. Oh, I pass, okay but I don’t know if I’ll get a promoted.’ I got promoted. So you do the work and you take the risks, and that’s the big part of it.”