The three act play reviewed in last month’s issue of The Collegiate highlights several weekends in the lives of eight homosexual friends as they struggle with relationships, AIDS, infidelity and other issues.

Kentwood resident Becky De Nooy was the first to speak out against Grand Rapids Community College’s support of Actors’ Theatre, which receives annual subsidies from the college as well as free use of Spectrum Theater. “Why are so many Actors’ Theatre productions about sex?” De Nooy asked the board. “What is the Actors’ Theatre agenda?”

During his own time at the podium, retired founder of Actors’ Theatre Fred Sebulske answered De Nooy’s question, “Our mission statement is that we are presenting entertaining, innovative, challenging, and thought-provoking plays. Our goal will and always will be to present the best of contemporary theater.” 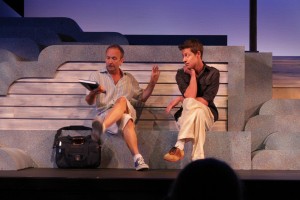 Director Jolene Frankey rushed to attend the meeting on short notice in order to defend the play, which has won a considerable amount of awards nationally.

She argued that the play contained far more “than just one naked man. It deals with a range of human emotions, the human experience, sickness, relationships, aging, loyalty… I am grateful to the audiences who actually came to see it who then have that full understanding of it.”

After hearing the public comments, Trustee Richard Ryskamp was quick to add his voice to the dissenters. “The article in the campus newspaper used the word ‘controversial’ three times describing this play” Ryskamp said. “I would suggest as a board we do need to sit down and talk about ends and limitations as to what will be subsidized.”

Attendees of ‘Love! Valour! Compassion!’ were provided with content warnings prior to the performance. “We present plays as they are written, we do not edit or censor them” Sebulske said. “it is not a play everyone will be comfortable with, that’s why we warn.”

The next play put on by The Actors’ Theatre is named “Venus in Fur” and will open Dec. 12.