On Tuesday, Grand Rapids citizens and the general public were allowed to see first-hand Grand Rapids’ trash process from start to finish: from the incinerator, to the recycling center, to the landfill. The annual trash tour, hosted by Sara Yob, a trainer for Grand Rapids Community College’s Training Solutions team, brings to light the reality of this preconceived notion of ‘away’: does it ever really go away? Not at all, as participants found today.

The tour started at Covanta Energy’s plant located on 950 Market Ave SW. This plant focuses on burning garbage from Grand Rapids and five other surrounding cities. Incinerating trash can be very controversial to some as it has negative impacts on the atmosphere. Levels of carbon monoxide, nitrogen oxide, sulfur dioxide, opacity and oxygen are measured every second of every day through continuous emissions monitoring systems (CEMS) to ensure that levels stay within safety limits, according to Andy Lang, chief engineer at Covanta.

“There are environmental impacts of the choices we have made,” said Lang. “We have emissions. I can’t deny it.”

Covanta Energy works hard to ensure that the amount of harmful toxins released into the atmosphere is as low as possible. “We’re staying not just below but well below” the daily limits allowed, said Lang. “Even natural gas companies have gas emissions,” he also pointed out. 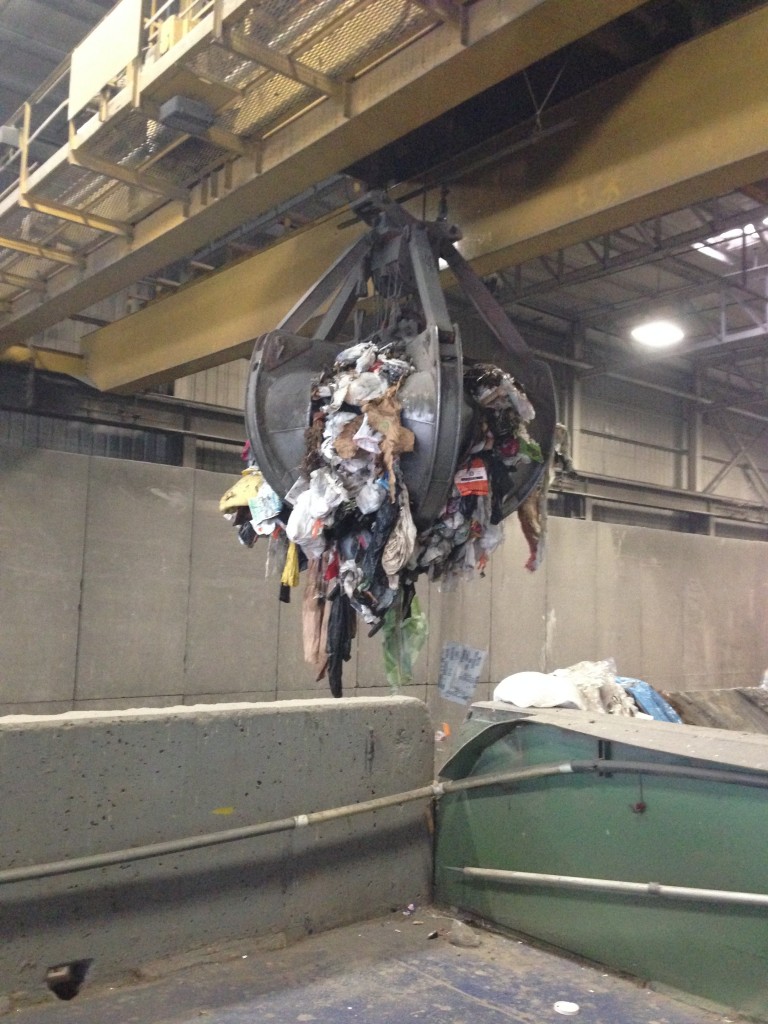 The incineration of garbage brought to Covanta helps reduce the volume of material brought to the Kent County landfill by 90 percent. These gas emissions are then converted into energy, enough to provide power to 11,000 homes.

After the incineration process, metal pieces that are leftover are recycled and the ash is brought to the landfill. Ash only takes up 10 percent of the space and 25 percent of the weight that solid waste produces, thereby helping to extend the life of the landfill, noted Lang.

Next on the tour was a stop to Kent County’s recycle center, Materials Recovery Facility (MRF). The MRF is a self-sustaining company. Their new plant, located on 977 Wealthy SW, processes about 100 tons of recyclables per day. Most of the sorting is done by hand.

When it comes to recycling, there are a few things that Grand Rapids citizens need to know. First, “Not all paper is paper, and not all plastic is plastic” as Ann Kaiser, resource recovery specialist for the Kent County Department of Public Works, pointed out.

There are many common misconceptions about what is recyclable and what isn’t. Some of the more common misconceptions include wrapping paper, tissue paper, photos and stickers. All of these items, though they have a paper base, can’t be recycled: wrapping paper for its clay content, tissue paper for its fiber content, and photo and stickers for their films/adhesive backs. Acceptable items include office paper, junk mail, newspapers, magazines and paper bags.

Any materials with a mixture of plastic and metal also can’t be recycled. Some of these items include chip bags and/or wrappers (ex. a bag of Fritos chips).

In addition, all items need to be perfectly clean—free of food, grease or other chemicals. The bottoms of pizza boxes typically aren’t allowed due to the grease and food residue soaked into the cardboard. Additionally, if empty household cleaning bottles are recycled (ex. laundry detergent, dish soap, shampoo bottles, etc.), the facility asks that residents make sure they are thoroughly rinsed out with no residue to avoid messy complications.

One item that Kaiser would like to see recycled more often is water bottles. “Less than 20 percent of water bottles bought are being recycled in Michigan, and water bottle sales exceed those of pop,” she noted.

For a complete list of what is recyclable and what isn’t, and to find more information on how to start recycling, visit www.recyclekent.org.

Last on the tour, and probably the most impactful of all, was Kent County’s current operating landfill located on 300 100th St SW in Byron Center. As the tour bus carefully ascended a narrow dirt road to the top of a hill, swarms of seagulls swooped low to the ground. The sheer number of birds flying around had fellow tour participants gaping in combined wonder and disgust at their living environment.

“Wanna know a funny fact about those birds?” asked Ron Landis, engineering/utility services division director of Kent County’s Department of Public Works. “Apparently they’re one step away from being a threatened species, but just look around us,” he said laughing, pointing at the hordes of birds squawking outside.

The smell of methane was easily discernible from the safe confines of the bus. The sight was not quite as alarming as expected, as viewers pointed out, but it certainly wasn’t pretty.  Piles of fresh dirt discreetly covered layer upon layer of compacted trash hidden a mere six inches underneath. What little trash was still visible was being swarmed by the seagulls as big yellow trucks drove over the last of the day’s piles, working hard to get it compacted and covered before nightfall.

Witnessing the final stop in the trash process brought to new light this mythical place of “away”. There it was, right in front of 30 participants, one tour guide and one bus driver: the means to an end really wasn’t a means at all. It was simply trash mixed in with dirt, compacted down and then covered by more dirt, with several hundred seagulls making their habitat on top of it. There was no clear-cut solution, merely a place to store the trash “for now” until future generations figure out what to do with it later.

Maryann Lesert, fellow tour participant and English professor at Grand Rapids Community College, felt similar impressions from the experience. “What I’m continually re-impressed with is that we have to go all the way back to the beginning and stop throwing so many things into that mythic place of ‘away.’ We’ve got to reduce the garbage that even starts out in any of those places.”