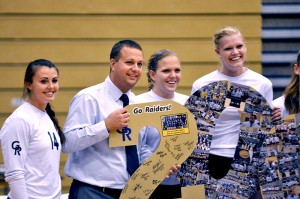 Will has been the head coach for seven years at GRCC and posted a win percentage of 82.3 percent, losing only 43 games. Since his 200th win, the Raiders have won two more games, pushing Will’s win average up to 82.8 percent.

“It’s something that a lot of kids and a lot of families have been apart of, so that was kind of nice that we were able to see a lot of our former alumni come back, and a lot of former parents come back… it was special in that regard, that it was celebrated from a lot of kids past and present,” Will said.

Athletic Director Charlie Wells said this is a big accomplishment for Will and GRCC.

“As a coach, that’s an awesome thing to have happen because you look at a career, you know, if you’re lucky to spend 15 -20 years in coaching like that, that’s a milestone,” Wells said.

Will was not the only one celebrating the big win. “I was honored to be a part of the celebration, especially because tradition is such a big part of our program, he deserves it,” said sophomore Abbie Gortsema.

Gortsema began playing this year for the Radiers when she transferred from Clemson University, where she previously played volleyball.

Gortsema says she prefers the way Will coaches to past experiences she’s had.

“His coaching style is relaxed, but he is intense when necessary, which is the perfect mix for our team,” she said.

Wells agrees that Will has a proven coaching style.

“He’s motivated them, I mean, you take the loss we encountered (Oct. 14), tonight they were right back up on point playing to the best of their abilities and giving great effort. And again, it’s the motivational part of the coach that I think brings a lot of that, in addition to, the determination of the athlete that is definitely been able to motivate them.”

Wells says he hopes the team will earn Academic All American honors again.  “That’s a very important piece because they’re there for the education,” he said. “I’m hoping that this group this year will achieve that same (honor) we did last year, in addition, to the playing in the national tournament as well.”

Wells has also been impressed by how much Will has surpassed all his expectations as a coach.

“He’s done a wonderful job leading and directing and guiding that program to where it’s ranked in the national level each year,” he said.

Will’s team finished with a losing record his first year as coach, but Wells said Will never looked back.

“I’ve talked to the athletes, a lot, and they’re giving me positive feed back… so yeah I’m very pleased.”

“Chip is a very young coach right now,” Wells said. “So by the time this thing is all said and done it could be upward into the 800th to 1000th win, you know, if he sticks around that long,…I can see that happening.