A new trend is bringing smokers in from the coming winter cold to their comfortable homes. There they will sit back, take a long drag on an electronic cigarette, and breathe out a clean cloud of water vapor a bit more freely than ever before.

The device, an e-cigarette as it’s known, can best be described as a battery powered smoking device that burns a liquid nicotine blend called e-liquid. By doing so, it eliminates many of the unhealthy elements from harvested tobacco and does away with second-hand smoke. Costing the smoker pennies a day compared to cigarettes, it has quickly developed an underground following. In the world of cigarettes, nothing is quite as controversial at the moment. 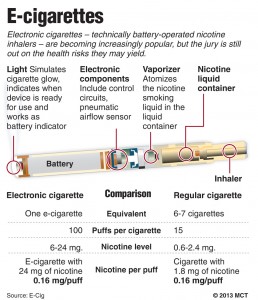 Having grown to a billion dollar industry, they are unregulated, untaxed and carry no age restrictions. Opponents and advocates argue with each other from each side of the fence about the benefits and possible health risks of this rising industry. Yet, there is a far more powerful force behind regulations: taxes, and the millions being lost to the still un-taxed e-cigarette.

For the industries affected, the wait so far has been the worst part. Dan Lawitzke, 27, co-owns a financially successful e-liquid company in Grand Rapids with his business partner, Dave Doud. Mister-E-Liquid employs 30 people in the Grand Rapids area and will be opening a second location downtown in November. Since opening, they have been experiencing staggering growth.

“Once we opened the store, it completely took off,” Lawitzke explained. “We started growing by twenty percent a month. We will be opening four new stores next year, right here in Michigan.”

Legal everywhere cigarettes are not, e-cigarettes have caught thousands of businesses and colleges off guard. With no standard procedure to deal with them, companies have preferred to turn a blind eye to a perceived passing fad rather than create policy. With nothing to enforce and nobody willing, e-cigarettes have flourished behind closed doors.

“E-cigarettes do not violate our tobacco free campus policy,” explained Leah Nixon, Grand Rapids Community College’s Communications Director. “But they are not allowed in classrooms due to the distraction they can cause.”

Enforcing that policy, however, is up to the teacher. Many educators remain unaware of what an e-cigarette is, let alone what it means or the health effects it might cause. GRCC students seem to split down the middle of this contentious topic.

“I have a couple of co-workers who use an e-cigarette, and I find it distracting,” said third year student Caleb Bickel. “I think it’s probably a healthy alternative, but it doesn’t belong in schools.”

Others disagree, such as GRCC student Jack Kaback. “I personally use an e-cig and I don’t see how it’s a big issue,” he said. “I feel it should be up to the teacher to decide if they want it in the classroom.”

Amidst this controversy in policy and use, it’s the students who use an e-cigarette that face the worst of the confusion. Students such as Evie Kiryanoff, who remain nervous about its future inside of the campus.

“I use the e-cigarette, and it helps me cut the cravings when I’m around someone who smokes.” Kiryanoff said. “It tastes better and it doesn’t stink, but I don’t use it in school. I always feel like someone will say something to me.”

Age restrictions of the product have also become problematic. No classification means that any child can purchase e-cigarettes. While some reputable e-cigarette stores have taken steps to prevent this, the market is still wide-open to young customers. Pure liquid nicotine, a primary ingredient in the accompanying e-liquid, is a new chemical for the FDA. No procedures exist for buying or manufacturing it.

Yet, within this minutia, successful e-liquid companies have begun creating their own governing bodies. Mister-E-Liquid was one of the founding members of one such group: American E-Liquid Manufacturing Standards Association.

“AEMSA is a self-regulation group for manufacturers of e-liquid, basing itself on better than food grade standards,” Lawitzke said. “Every member of AEMSA agrees that no one under the age of 18 can buy in our stores.”

These governing bodies have been just as much a result of government inaction as business ethics. Originally promised for 2011, regulations finally expected to be rolled out this month have once again been halted, leaving many business owners, e-cigarette advocates and opponents to ask the simple question of when?

Preferring not to take a passive role in the process, Mister-E-Liquid will be moving to a new production facility. A move they hope will prepare them for the new set of government standards.

“We studied a lot, and what we found was that when the government aims to regulate a new product, they look at what systems of self regulation have already been put into place,” Lawitzke said. “They often base laws off of these self regulations. We expect a lot of regulation on the manufacturing side.”

Doing so was no easy move and it required their new manufacturing plant to be built to costly standards.

Even with all of their work, there is no guarantee that they will meet new governmental guidelines.

“We have been saving our pennies for this day,” Lawitzke said. “We will be well positioned to pay for any licenses, fee’s or upgrades government law mandates.”