World renown classical guitarist Denis Azabagic will be preforming tonight with his wife Eugenia Moliner, together they comprise the Cavatina Duo.

“I began learning guitar when I was 6 years old, in Bosnia and Herzegovina,” said Azabagic in an email. “After three to four years I was practicing it already seriously, maybe two or three hours a day, and at the age of 14 I went to a Music High School. I became what I am today through a lot of dedicated practicing… I had a lot of encouragement from my parents, and my wife was with me since I was 20 years old as my critic, supporter, (and) inspiration.” 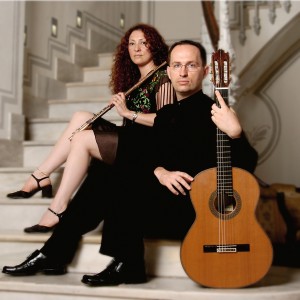 The musicians are known globally for their guitar and flute duets and the way they interlace the sounds of their instruments so naturally, it’s as if the two were meant to be played together.

“Eugenia and I met in Rotterdam, The Netherlands, in 1991, where she came to study, and I came to avoid the war in former Yugoslavia,” he said, about how he and Moliner came to be. “I enrolled to the Conservatory and that is where we met. We started dating and decided to try to play together, and in 1996 we won a chamber music competition in Rotterdam. In 1998 we recorded our first CD which had really good reviews, and decided to make a duo something we would be dedicated to.”

Dedicated they have been, recording five studio albums to date all while touring and teaching at Roosevelt University in Chicago, Ill.

“I wanted to teach at the higher education institution, and Roosevelt was responsive to my search for a teaching position,” Azabagic said, explaining how he began his career as an educator. “I did not have a master plan in regards to teaching, but over time, it has become a very important part of my musical activity.”

“Out of Africa… and Around the World” was released late last month, Azabagic’s 10th studio album. When asked how instruction and touring effects recording sessions, ”…we are recording in smaller sessions, about 10-15 minutes of the music at a time, and then learning new 10-15 min, tour with the new pieces, record, and so on, until there is enough material for a full CD. So it can take several months, a year from start to finish.”

Though his performances are complex, Azabagic has a natural music selection process. He said he he listens to pieces sent by composers and simply chooses “music that I like, that speaks to me.”

A peek into Azabagic’s gear cases would reveal guitars made by such master luthiers as Stephan Connor and the late Thomas Humphrey. Strung up with strings by D’Addario.

As for those with aspirations to take their careers from the college level to a professional performer, Azabagic had this advice: “One must be persistent to make the living from a music, specially from concertizing. It is not easy, but if you love it, be serious, dedicated and work very, very hard.”