The recent death of a Grand Rapids Community College student has inspired her friends and family to speak out against drunk driving.

About 100 people gathered at a candlelight vigil in Lowell Oct. 24, held in memory of Andrea Herrera, the 20-year-old GRCC student who was killed in a crash police said was caused by a drunk driver on Oct. 10.

Herrera, 20, of Lowell, and her boyfriend Eric Fischer, 23, of Caledonia, were driving home from a Detroit Tigers game when police said a drunk driver, identified as 27 year-old Wyoming man Joseph Ford, collided with their 2007 Mazda 3 at the corner of Patterson and 36th Street in Cascade Township causing both cars to then hit a semi truck. Fischer and Herrera were taken by ambulance to Spectrum Health Butterworth Hospital where they died.

Ford is charged with two counts of operating while impaired.  One count for each life that was lost.  According to court documents, a passenger in Ford’s car said they had left a bar after drinking between two and four beers and two shots of liquor.

At last month’s vigil in Lowell, friends and family gathered to remember Herrera and celebrate her life. Some made signs stating, “Say No To Drunk Driving” and “Andrea Herrera Forever in our Hearts”. Paper lanterns were also lit in memory of Herrera.

“Andrea touched every single one of our lives,” said Mariah Moore, friend and coordinator of the vigil. “Whether it was one second, one day, one year, 10 years, or 20 years, she affected all of us. She was a part of all of us. She will be forever in our hearts and we will never forget her as a beautiful, wonderful, joyous soul.”

During the vigil, Moore spoke about drunk driving and the fact that its devastating effects are 100 percent preventable. “You always think ‘Nothing bad will happen,’ , and maybe it won’t the first time, the second time, maybe not even the third time, but it will if you drink and you drive. If you decide to turn that key, you’re putting yourself and everyone else in danger.”

Jonathan Bassin attended the vigil and described his friend as shy and fun. “She was perfect,” Bassin said. “She was athletic and artistic.” 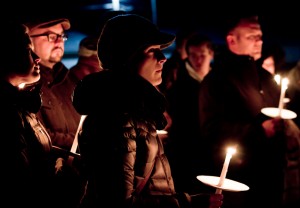 Her cheer team will always remember her as never giving up on anything. “She was a beast in sports,” said one of her teammates, as they recalled a story of her on the field.

Herrera was working toward a degree in Graphic Design at GRCC and friends said she loved art and photography.

Her Art History professor at GRCC, Kimberly Overdevest, remembers her as a “sweet soul” who will be greatly missed at GRCC and the Visual Arts department, according to the vigil’s Facebook page.

Loved ones say they will remember Herrera as being beautiful inside and out, caring, creative and talented.

Herrera is survived by her parents Casey and Mary Lynch and Scott and Daris Herrera, and her brothers, Anthony Herrera, Tyler Lynch and Alex Herrera.

Erica Horoky contributed to this article.