As I paced the hall waiting for my ride, I knew this night would be one for the books. I was given the opportunity to ride along with Grand Rapids Community College professor and Sgt. John Wittkowski.

Wittkowski’s life plan didn’t start off with dreams of the police academy.

“I didn’t initially think of this career choice to be perfectly honest,” said Wittkowski, 46. “I went into business, got a degree in finance, but I didn’t like the profession.

“Then I started volunteering for a neighborhood organization and got to meet a police officer. I used to get into a lot of trouble when I was a kid, so I had a negative stereotype about police. But this particular officer was completely different; kids loved him and he was great with people. He was very respectful, very inclusive, treated people fairly (though sternly) and I really understood that this was a job I’d like to do. So I, kind of under his tutelage, decided to become an intern at the police department and the rest is history.”

A typical shift for a police officer consists of many different components. First, officers get dressed and then head to lineup. The night shift officers gather in the squad room at 5:30 p.m. Mail is delivered to the officers who are then briefed about the day’s activities. After that, the lieutenant in charge of the shift will read off all the officers names, and their assignments before the officers head out to patrol the streets.

I prepared myself for a crazy night, much like an episode of “Cops” but with fewer cameras. However, my night was further from intense and instead filled with an insightful look into the lives of police officers.
At 6:30 p.m. Wittkowski picked me up at my house. By this time I had already gone through a Venti White Chocolate Mocha, in preparation for a long night, and was ready to go.

After strapping me into a bulletproof vest, which was by far the most comforting yet uncomfortable part of my attire, I headed into what would be my mobile office for the next nine hours.

Once in the car, I acted like any mature adult would.

“You can touch the computer,” said Wittkowski, as he began to walk me through the mini laptop’s technology and briefed me on all the gadgets in his car, including the shotgun that was installed between our seats.

We began our night’s journey by patrolling around the south side of town, predominantly the center of our area, Franklin Street and Eastern Avenue.

After about 20 minutes in the cruiser, we picked up our first call.

Once we arrived at the home, Wittkowski stepped out of the car inviting me to tag along. I anxiously scrambled out of the car, breaking a nail in the process. I clearly wasn’t cut out for police work.

We were met by an intake probation officer who was stopping by to pick up a young man who seemed to be having problems with his curfew and mother.

Wittkowski, the intake probation officer and Officer Jenny Rood, another officer who joined us on the scene, all stepped into the home while I stood by the car.

Once everything was taken care of, I was reunited with Wittkowski and we headed back out on patrol.

While we rode around waiting for action to occur; Wittkowski and I competed in naming the artist to various songs. I cannot confirm nor deny that he beat me in this mini competition.

Another call came through, and we were once again on our way to rid the Grand Rapids streets of crime. When we arrived, the officers who responded to the initial call were wrapping up by checking through a woman’s vehicle while her children sat on a curb watching in disbelief.

The woman was placed in the back of another officer’s cruiser while Officer Tim Hoornstra blew off steam about the current situation. Wittkowski figured that Hoornstra was in such a great mood that maybe he’d like to demonstrate a brief K-9 tutorial for me. Hoornstra willingly agreed saying, “I’ll meet you at the ramp.”

We drove down Sheldon Street and Wittkowski pulled into the ramp of Catholic Central High School. Soon after, Hoornstra arrived with his German Shepherd, Brick.

I was able to throw the ball for Brick, but in an unfortunate series of events, when I threw it, it hit a bar in the parking ramp’s roof and bounced to the ground, confusing Brick and myself. Wittkowski and Hoornstra both had a good laugh at my athletic abilities, or the lack there of.

After that embarrassing moment, it was time we headed back to the road to further patrol, which I was grateful for.

Our next stop brought us to Madison Street. A homeowner called about a potential disturbance and when we arrived at the scene, officers immediately saw the suspect heading down the street and stopped him. When they ran his name through the Law Enforcement Information Network (LEIN) it came back that he had a driving warrant and would be going to jail.

This upset the man who was placed in the back of Wittkowski’s cruiser. He began screaming profanities and accusing the officer who stopped him of being racist.

“Man this is bullsh*t! These mother-” the perp said.

Then, suddenly it got quiet, too quiet. I turned around and the once vocal man was seductively looking at me through the bulletproof glass.

“Hey snowflake, how you doin’ tonight?” he said.

“Uh… I’m okay,” I said nervously as I focused on Wittkowski checking out the scene, anticipating when he would return.

While I sat alone with the boisterous perpetrator, I couldn’t help but laugh at my new street moniker all while pondering the different ways I could monogram “snowflake” on all of my belongings.

The man began to get loud again until Wittkowski explained the call and why he was picked up. As I sat as a third party observer, it was clear that the Grand Rapids Police Department had some serious people skills. I was amazed at how this man who once was so hostile was now calm, for the police of all people.

As we rode in silence to the Kent County Jail, I couldn’t help but think about what it would be like to arrest someone; this thought quickly exited my mind as Wittkowski wouldn’t let me play with the handcuffs.

Once at the jail, I had a backstage pass to what it was really like. We pulled up to what looked like a huge garage. After typing in a code, the doors opened and we parked.

After 10 minutes of paper work, he was placed in the hands of the Kent County Jail and we were off on our way.

At this point in our shift it was time for the most quintessential part of our night, a coffee break. This was a mission I deemed more fitting for Wittkowski, who kept yawning. After getting his coffee, we were back on the road.

While bonding over 80’s music, we were finally dispatched to another call taking us over to Delaware Street for a domestic dispute.

The officers calmly worked out the problem. Apparently the homeowner was evicting his girlfriend who refused to leave because she already paid him rent money.

We were able to get the woman to leave and the officers even suggested she call them back when she wished to return for her belongings.

As our shift began to wind down, we stopped at the hospital for a bathroom and snack break.

After our pit stop, we witnessed a van swerve and drive over a median.

Wittkowski sped up and turned around, a move that was made effortlessly, and pulled over the van. The driver immediately began to step out of his car.

“Stay in your vehicle!” Wittkowski screamed as he ducked behind his steering wheel and kicked his foot to his door to prop it open.  The man quickly jumped back into the van and Wittkowski proceeded to get out of our car and walk to the van.

While collecting the man’s information I couldn’t help but ponder all the different things police officers see, and how brave they truly are. All night I was able to see that these officers are real people.

As Wittkowski came back relaxed, my heartfelt epiphany was put on the back-burner. Wittkowski began running the man’s information, while explaining that the man was having car problems and initially stopped to check on his vehicle. The man’s record came back clean. After returning the man’s license and registration, it was back to patrolling.

While looping back around the south area, we got what would be my last call; a car parked at a club near downtown allegedly possessed a gun.

As we arrived at the scene, I was told to stay in the car, which was perfectly fine by me. Although uncomfortable, I was grateful for my bullet proof vest, but not grateful enough to risk trying it out.

From the safety of the cruiser, I witnessed officers evacuating the packed car. Each person in the car was handcuffed and put in the back of a cruiser. I was fortunate enough to have yet another companion join me.

As I watched Brick sniff through the car, I heard our newest passenger clear his throat, trying to get my attention.

“Is that your dad or brother?” he asked, signaling to Wittkowski.

“Can I get your number?” the suspect asked.

“I don’t think so,” I said as I turned back around.

As I contemplated whether or not I was appalled or flattered about all the attention I was getting tonight, Wittkowski came back just in time to save me from any further conversation. Wittkowski briefly disclosed to the young man that they were called due to a report of a gun but the only thing they found was an open container. The young man was ticketed and released.

After we finished up, Wittkowski decided it would be best to go back to the station to finish up paperwork but not before taking me home. Although my pleas to stay were denied, I was relieved to hang up the bullet proof vest.

As we pulled up to my house, I removed the bulletproof  vest and thanked Wittkowski for the ride. 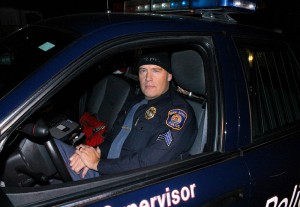 I stayed awake thinking about the night I just had and what it truly meant to be a police officer. I could feel that heartfelt epiphany rising back into my brain. I spent one night on the job and I was relieved to go home. These officers have to go back every day, being apart from their families to risk their lives to protect us.

Although I didn’t have the stereotypical television violence play out on my ride along, what I learned from this experience was definitely something I’ll never forget. I came to the realization that police officers are heroes, whether involved in a major drug bust or simply allowing a college student to tag along on a typical night in Grand Rapids.