It’s Saturday. It’s gameday and you’re headed to the bar wearing your favorite team’s jersey. A flag is draped over your back, and a scarf wrapped around your neck– but it’s 7:45 a.m., and college football won’t start until noon.

More than 3.4 million Americans tuned into NBC on opening weekend of premier league soccer coverage, and I was one of them.

However, on opening day I didn’t make it down to the SpeakEZ, 600 Monroe Ave NW. The local bar has unofficially become home of the English Premier League on Saturday and Sunday mornings.

“I never wanted to open a sports bar,” SpeakEZ owner Eric Albertson, 42, of Grands Rapids said. “I’m never going to outdraw Peppinos. It’d be foolish for me to try. The thing about sports bars is that they’ve always ignored football.

“Mike Ewer, a QPR fan, told me I should open up for football, and I told him that I’d love that. He told me that they had been going other places, and he felt like the other places were doing the normal sports bar thing, ‘Oh soccer sucks.’ So what we’ve done here is put the Arsenal fan, next to the Chelsea fan, and turned them against the normal Grand Rapids guy who says, ‘soccer sucks.’”

The SpeakEZ, with the underground football following, still remains somewhat of a secret amongst the football crowd.

“It started off very grass-roots,” Albertson said. “We hardly did any advertising, and we still really haven’t. We have a Facebook page, and we really open up (the bar) when we feel like it.”

Albertson can tell he has the right group of people coming in on these Saturday and Sunday mornings.

“Arsenal nation is my biggest crowd,” Albertson said, “If you were ‘johnny-come-lately,’ and you were like, ‘Oh I’m going to like soccer now,’ you’d be like a Yankees fan, and like Manchester United. The fact is, we don’t have that many United fans, and the ones we do have, have been fans their whole life.

“To listen to all these people come down, and talk about the game, is really nice. I know more about football than 95 percent of the public out there. That last 5 percent are coming here.”

The SpeakEZ opened in February of 2012. It began showing EPL matches last fall.

“It started when Mike Ewer came in here, and he’s from England, so he’s got this thick British accent,” Albertson said. “As soon as I heard that accent I grabbed him and said ‘Hey lets have a proper pint.’ He told me that he had been to other places, and that it wasn’t working out. I immediately told him that I’d open for him.”

“He said we have to pick a team, and we’ll just have some fun with this,” Albertson said. “It took a while, I became a Hammer (West Hampshire United), and Calin became a Toffee (Everton).

Despite being a West Ham fan, Albertson’s first love is the United States Men’s National Team.

“I got really into the USMNT in ‘94,” Albertson said. “I love the World Cup, because we’re always the underdog. It’s why I loved the ‘Miracle on Ice’. I countdown the years to get to the world cup. The nice thing about opening the SpeakEZ was being able to watch these international players play for their club teams.

“I love that the U.S. is the underdog, and I love that it’s country versus country.”

Learning the lingo of the EPL is key to understanding.

“I have utterly given up on the NFL,” Albertson said. “I at least see what they did and see where they are at on the table. You see what this sport (English football) has done to me? I’m referring to the standings as the table (what the EPL calls its “standings.”) And when I look at the schedule its no longer the schedule. It’s the fixture list. It’s funny how we get into that vernacular.”

The SpeakEZ became an official Arsenal America branch, through the efforts of Zach Boswell, 31, of Grand Rapids.

“I had been a member of Arsenal America for a while, and had been attending games at the SpeakEZ with a crew of four or five,” Boswell, a Senior Art Director and Creative Manager at AUXILIARY Advertising & Design said. “I had gotten SpeakEZ listed on the main Arsenal website as a “place to watch”, but it was nothing official. This past summer there was an opportunity for smaller branches to become officially recognized by Arsenal America. I jumped at the chance, and after some emails back and forth, we were recognized, and we joined a nationwide community of supporters.”

Albertson didn’t know that Boswell had registered SpeakEZ as an Arsenal bar. 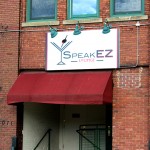 “Zach’s just so mega-casual,” Albertson said. “He calls me up and says, ‘Hey just so you know, you’re on Arsenal.com,’ I was like ‘What?’ Then he said he’d be in for a beer later, and that he had a story for me. I tell everyone to see if we can become a supporter location for their club.”

Boswell, who played football his entire life, really got into watching football after spending time in Japan.

“The 1994 World Cup was the first time I got really excited about it,” Boswell said. “From there I followed the Japanese and Dutch national teams closely. I also followed the J-League (Japanese Football Association) with no particular allegiance. I followed other top teams loosely, always with a slight lean towards Arsenal and Ajax.”

Boswell and his friends used to watch football at Graydon’s Crossing, but Fox Soccer Channel upped their prices, and the channel was dropped by the pub.

“They were fairly accommodating, but not particularly enthusiastic about a bunch of fans getting drunk at 10 a.m. yelling at TVs while the after church brunch crowd filtered in,” Boswell said. “We of course discovered this (the channel being dropped) on match day. A friend of mine had heard SpeakEZ was showing games, and so we sauntered down to SpeakEZ, and that was that.

Boswell was happy about the discovery.

“An owner passionate about the game, a diverse fanbase, and a small but loyal crowd? That’s all I needed,” Boswell said. “It was simple, quiet and boozy. I got to meet fans of all teams, who were there to watch, discuss, and commune. Kind of like finding a new home.”

Dan Weatherhead, 34, of Grand Rapids, is a regular attending Arsenal fan, who is there for most matches.

“The staff is very friendly,” Weatherhead, the network support specialist, said. “The owner is a huge footie-fanatic, and there is a great group of Arsenal supporters, which makes the matches fun to watch at the pub.”
Weatherhead has traveled to North London twice to see Arsenal.

“I saw both at Highbury,” Weatherhead said. “They were amazing. The atmosphere in the stadium was unlike anything I had ever witnessed. Songs from the opening kickoff until the final whistle. The speed of the game is much quicker live, and everybody I met at the stadium was very friendly. The whole thing was just great.”

Despite the SpeakEZ being an actual Arsenal Bar, Albertson hopes to get more fans of other clubs (teams).

“I want the SpeakEZ to be a place for all footy fans,” Albertson. “I just want people who get the sport, and can get along in here.”

The Saturday and Sunday morning games are becoming more and more popular as people learn where to catch their favorite club.

“At some point if it gets that big, I might not be able to have as much fun with it,” Albertson said. “Back in the early days, when there were like four or five of us here, I’d sit right with them. Someone would say to me ‘I’d like a beer,’ I’d say right back, ‘Tap handle is right there, pour it yourself.’ For me to come and open up for just one person, at seven in the morning, it doesn’t speak to trying to build a business, it’s me doing it for the love of the game.”

Even though the SpeakEZ currently shows EPL on the weekends, the plan is to add some other leagues.

“I would like us to start doing some more Bundesliga (German football league),” Albertson said. “Rob Schafer posts a list every week on our Facebook page of upcoming games. Ever since Goltv got dropped by DirecTV, It’s been harder finding the Bundesliga games.”

Albertson thinks that the move to NBC is working out well for the EPL and it’s fans.

“NBC did a great job,” Albertson said. “Especially if you have seen that video, with Jason Sudeikis, as Tottenham Hotspur manager. It picks on both the Brits, and Americans. I really think NBC did a nice job a laying out the clubs for people. Not the players, but the history of the club.”

Weatherhead is a SpeakEZ regular, and doesn’t limit himself to only watching games there.

“My parents like going to the bar,” Weatherhead said. “Sometimes I’ll go and have a beer with them, or to watch a band that they are interested in seeing.”

Albertson takes pride in the face that SpeakEZ isn’t an overly expensive restaurant  with everything on the menu is under $20.

“Our menu is old world flair with pricing that is designed so folks can afford to dine here more often than what I call “Special Occasion Dining.”

With jazz on Sundays, open mic night on Mondays, and live music on Wednesdays, the ‘prohibition era’ SpeakEZ has carved a niche for the football fan, and customers of good taste alike.