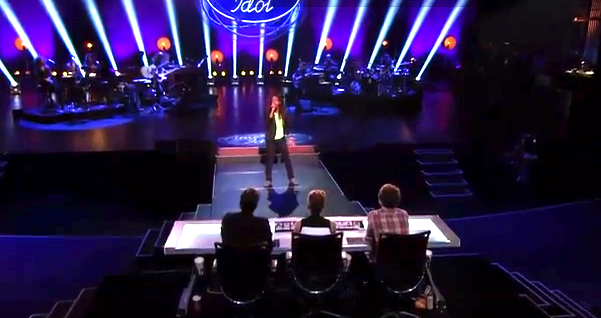 Former GRCC student Maurice Townsend is chasing his dream of being an American Idol.

He auditioned in Detroit last July for the current season of American Idol. Townsend sang “So High” by John Legend for his audition, which American Idol viewers saw on television. Judges Harry Connick Jr., Jennifer Lopez, and Keith Urban gave him good feedback and sent him through with a golden ticket. Connick told him he had a really great performance and even said, “He’s the one who should have recorded that.”

Townsend chose to audition with that song because he can really relate to it, and just really loves singing it. “It captures others attention when I sing it,” he said.

Townsend attended GRCC at the age of 20 and sang with the student choir, Shades of Blue, under Director of Vocal Music Duane Davis for about a year. When enrolled, he took theory, choir, and music performance classes.

A graduate of Ottawa Hills High School, Townsend currently majors in human resources at Baker College, and is the music minister for Living Word Christian Center on Kalamazoo Avenue.

Townsend auditioned for the show because he said it’s his dream.

“I love music,” he said. “I was getting close to graduating with my human resources management degree and I love that also, but I was like, ‘Let me give American Idol one more shot,’ you know? To see if I can make a living doing something that I really, really enjoy doing, so that is why I decided to go out,” he said.

This isn’t the first time Townsend has auditioned for “American Idol.” He tried out eight years ago in Detroit and made it past two rounds before getting sent home.

Since he was a little boy, he has always remembered having a passion for music. “I don’t know exactly where it came from. I grew up in a church, just singing in the choir. My dad is actually a pastor, so we were always at church, there were instruments all around us, so we always sang,” said Townsend.

When he was about 13 he started helping out with the choir at his church. At 14, he became the choir director and then he was the praise and worship leader. “I started doing everything musically in the church,” Townsend said.

He said his family is very supportive of his “Idol” adventure. Back at home in Grand Rapids, he has a wife of four years, Tiffany, and four children watching him compete in the singing competition.

“They are hugely supportive…my boys are really pumped up to be able to see me on TV doing what I love to do,” he said. “My wife is one of my biggest fans, even from the very beginning. She is actually the one who pushed me to go audition.”

Townsend said “American Idol” has been a great experience for him so far.

Before he actually met the judges, Jennifer Lopez was his favorite, but he left his audition a Harry Connick Jr. fan. Some of Townsend’s personal music icons are John Legend, Gavin Degraw, Michael Jackson, Justin Timberlake and Bruno Mars.

When asked about his goals, Townsend said, “I want to able to make good music. This is a good start for me to show others my voice, and to let them see what I have to offer…I just want – after this – to be able to put out some good music and hopefully succeed in doing it.”

Shelby Corliss contributed to this article.