Grand Rapids Community College Chief of Police Rebecca Whitman has been going from building to building this semester, presenting a revised active shooter safety plan to faculty and staff.

“(The community) is to a point where we’re realizing we can’t live in a bubble, we can’t sit back and think it’s not going to happen to us,” Whitman said in a presentation to a group of faculty and staff in the Learning Resource Center on Feb. 4, during which she instructed them to share the safety information.

“Students and visitors are going to look to us in the event of an emergency,” she said.

In the past, police forces trained for barricaded gunmen situations and students were taught to ‘lockdown’ or take shelter in place. However, like GRCC police, law enforcement officials nationwide have been instead focusing on developing a quicker response to shooter situations, and they are teaching faculty, staff and students to run, hide or fight, depending on their circumstance.

The biggest difference with the new strategy is the flexibility and speed of the response. First responders are now being trained to head toward the sound of gunshots, alone if necessary, to neutralize a shooter as quickly as possible, rather than waiting outside of the building for Special Weapons And Tactics (SWAT) teams to arrive.

“We will bypass the victims in the search for the suspect,” said Whitman about first response teams. Their first priority is to stop the shooter before returning to help victims. Rescue teams and emergency medical personnel will follow the initial responders.

Rather than barricade doors and hide immediately, Whitman encouraged staff and students to escape the area if they can safely do so.

“If you are in imminent danger, get out,”  Whitman said. “Try to find a secure location, a safe place you can wait.”

If evacuating, the police department asks that students stay in proximity to the college and not try to leave the parking ramps with their cars. Traffic exiting the ramp can obstruct emergency personnel trying to get to the scene to help, and police need to make sure everyone is okay by taking account of evacuees.

If evacuating the area isn’t possible, that’s when the police recommend hiding or sheltering where you are. Switch off lights, silence phones and push heavy furniture against the doors. When you’ve done all you can and are still faced with impending violence, resistance can save lives.

“Let’s not be sitting ducks,” said Whitman. “This is your life to fight for.”

Anything in the room can be used as a weapon. Fire extinguishers, chairs and books can all be swung and thrown to disable or disarm an assailant. 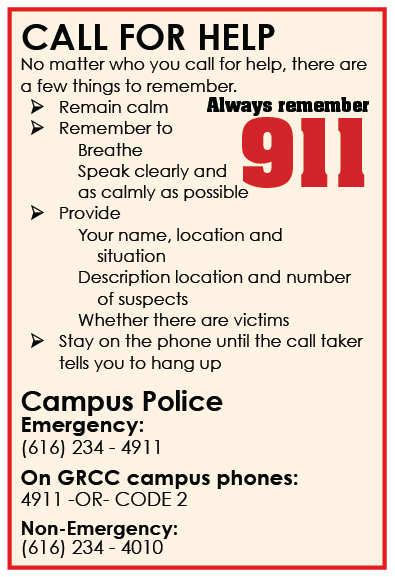 Gabe Marcelo, a 23-year-old sophomore at GRCC, is particularly reassured by the new plan. He was on the Michigan State University campus during the shooting that happened there on Jan. 31.

“I’m kind of relieved that my own campus is updating or tweaking their plan,” he said. “It’s a good idea to bring awareness to these types of situations and prepare the best way we can to stay safe.”

Whitman doesn’t think there’s any cause for concern on campus.

“We believe very much so… that GRCC is a very, very safe environment, she said. “We are not doing this training because of anything on campus.”

Marie Granderson, another sophomore on campus agrees, but is happy the plan is getting an update.

“GRCC is a safe place, but I think it’s really important to prepare everyone just in case something does happen,” she said.

During her presentation, Whitman also pointed out that people don’t just ‘snap’.

“In every single situation, somebody knew something,” she said, referring to suspicions people had about the shooters who have gone on rampages in other cities.

The Behavioral Intervention Team at GRCC was formed as a preventative measure. They observe faculty and student actions and intervene with counseling and other programs when behaviors are erratic or troublesome. 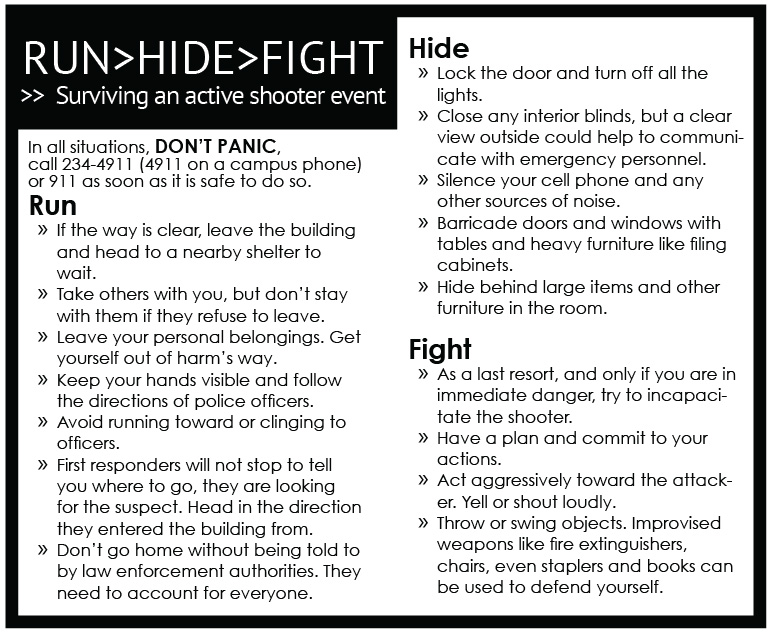