There’s no denying the popularity of Grand Rapids Civic Theater’s production of “Les Misérables.” Auditions attracted actors by the hundreds, and shows started selling out before a cast was selected.

More than 375 people auditioned, but only 50 were offered roles in the musical. Two Grand Rapids Community College music students were among the chosen group. Robbie Ellis, 20, of Ada, and Joshua Regan, 20, of Byron Center both made the cast.

The show’s co-director, Bruce Tinker, said that it is a rare event to have this many people interested in auditioning and attending a show so far in advance.

“It’s a terrific cast, amazing voices, beautiful music that works so emotionally… sets and the lighting are going to be beautiful,” Tinker said. “It’s really going to be a tremendous event.”

Ellis said that of the shows he had auditioned for at Civic, “Les Misérables” was the biggest he had ever attempted.

“At callbacks, it was very narrowed down at that point…it was competitive, but it was a lot of fun,” he said.

Regan auditioned for the show while he was juggling many other things at the same time.

“I was playing Rolf in “The Sound of Music” at Civic, as I was doing my finals at GRCC, and trying to prepare for an audition, all in the same day, same week, same month. That was tiring, but it was exciting, too. It’s exhilarating to try out for a show.”

Dr. Stephen Barton, GRCC’s director of choral activities was quite excited to have two students from the music program in Civic’s show.

“Students have to have a lot of maturity to be able handle both their music education and experiences outside of the classroom,” Barton said.

What drew Ellis into auditioning for “Les Misérables” was “the grittiness of it….and the emotion behind it.”

The phenomenal music made Regan want to audition.

“I think that is why so many people love it, because the music (from “Les Misérables”) is some of the best in musical theatre,” he said. “Among the musical theater crowd, it’s the pinnacle…to the community and to those who know the story, there is so much depth.”

Ellis enjoys being a member of the ensemble because of all the different characters he gets to play during the course of the show. Even with 50 members in the cast, there are many little parts to needed to make up each scene of the show. 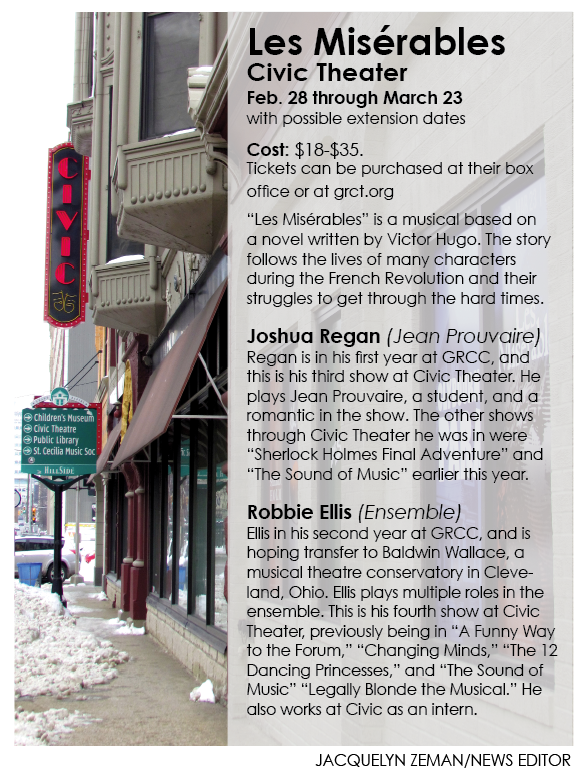 Both said rehearsals are quite fast-paced and challenging.

“It is hard because you get so much information at once,” Ellis said. “You are blocking, singing, dancing, and memorizing, all at the same time. Putting all those things together at once in a rehearsal process can get pretty difficult.”

Regan did research on his character, Jean Prouvaire, to better help himself get into character.

“He is the poetic one who is a little more romantically inclined than all the rest of the guys in the show, but he is very patriotic as well,” he said. “He is a student, a follower…but he is politically informed.”

Regan appreciates the value of his experiences with the music department at GRCC in the past year, too.

“I recognize that GRCC has a fantastic music program,” Regan said. “I think a lot of times it is looked at as just a community college, but they have done a spectacular job of pulling together a wonderful team of professors and doctors that can really teach the information.”