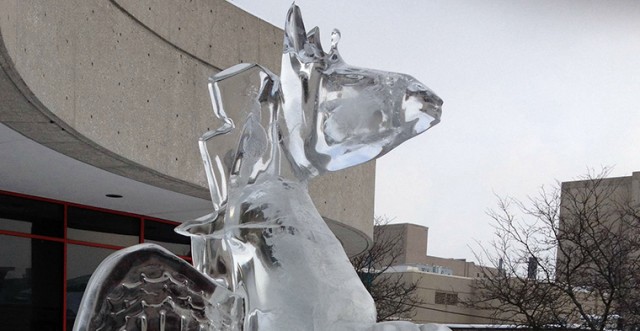 Though the frigid temperatures and recent bouts of winter weather have had schools closing, students moaning, and made the roads precarious to travel on, there is one group of students at Grand Rapids Community College who not only embrace this wintry season, but use it as time to express a rare art form: ice sculpting.

GRCC has been teaching an ice carving class through their culinary arts department for the past 18 years. In those 18 years, our ice sculpting teams have earned medals in competitions all around the state. These competitions, which are known for their difficulty in scoring and judging, are not for the faint of heart. They require talent, determination, but most of all, dedication.

This mantra is nothing new to the two current members of the ice carving team, Jessica Miller and Levi Knoll. Both students hope to complete the culinary degree program this spring and are learning to carve thousands of pounds of ice while pursuing their dreams.

Knoll joined the ice carving class to pick up a new skill, but has quickly found himself with a new time-consuming hobby.

“Really, I got into it to learn,” Knoll said. “I thought it’d be fun, and something I can add onto my resume.”

Knoll’s started carving last winter semester. By December 2013, he was crafting a piece he’d helped design, a whimsical sculpture of a penguin snowboarding. Yet these works of art are no child’s play.

“(The hardest challenge) is physical labor into it. Bending down and being on your knees for an hour and half. Dealing with minus 30 degree wind chill.”

Yet even with these extreme conditions, Knoll’s appreciation for the craft pushes him forward. His favorite part about the sculpting process is driven by the desire to create. “(It’s) pushing the creativity and how you can utilize the ice.”

Jessica Miller is no amateur to the carving world, and has participated in ice carving competitions for the past three years. “I love the adrenaline rush. (It takes) lots of practice, even when it’s bitterly cold.”

Miller pushed herself this year and tried a more difficult piece, which became increasingly hard to work with when temperatures are unpredictable. Her biggest challenge is battling the elements as she creates these frozen creations.

“You’re competing against yourself as well as everyone else,” she said. 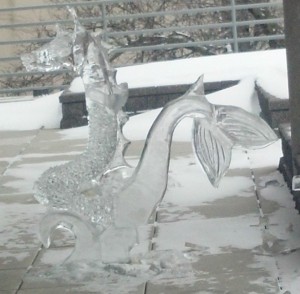 Her experience has served her well, as she is one medal away from being considered a professional. And these experiences will stick with her long after she graduates.

“I want to keep ice carving in my future,” she said, adding that she is open to new experiences as well. “I want to find different parts of the culinary field, I want to experience them all and figure out what would be a good fit for me.”

Miller and Knoll, who have been friends long before they started competing together, both described their experience in the competitions as a positive one.

“It was easy,” Knoll said simply, commenting on his partnership with Miller.

Their partnership was a complementary one, as it resulted in them winning fourth place as a team in the National Collegiate Ice Carving Championships in Frankenmuth, Mich.

You can view both Knoll and Miller’s pieces outside of The Heritage Restaurant in the Applied Technology Center.