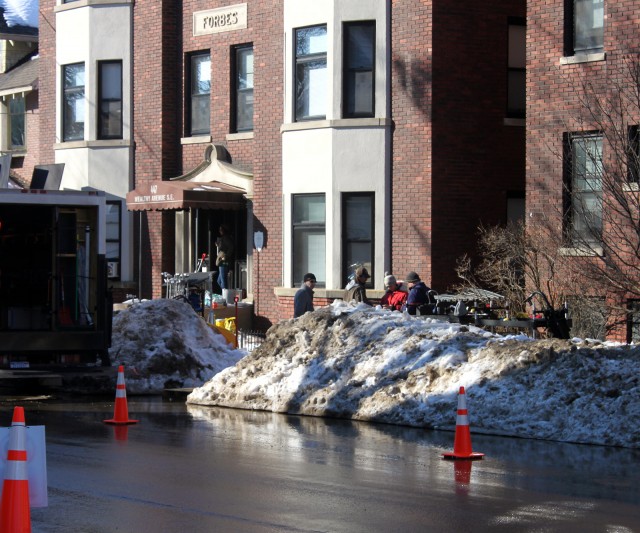 Jesse Eisenberg is back in Grand Rapids, four years after his last visit, to shoot another film.

“The End of the Tour,” which co-stars Jason Segel, as the late author David Foster Wallace, on a 1996 book tour, is being filmed in Grand Rapids. The script is based on the book “Although Of Course You End Up Becoming Yourself: A Road Trip With David Foster Wallace.” The book is written by Rolling Stone magazine contributing editor David Lipsky, Eisenberg’s character, and recounts his experience writing an article about Wallace. The film plays out over the course of five days, as Lipsky follows Wallace around the Midwest on his tour.

A major portion of the film is slated to shoot over the next five weeks in Grand Rapids, while the film is actually set in Bloomington, Ill. With Director James Ponsoldt (“The Spectacular Now”) in charge, shooting began Feb. 19 in an apartment building downtown, on the northwest corner of Wealthy and College.

Tenants of the adjoining apartment complex were camped out on the front porch waiting for glimpses of the famous actor. While they were too shy to say anything, he did pass by many times in between takes, much to the excitement of the die-hard fans on the porch.

Other stops have included a building on South Division, and Redux Books, on the corner of Lake Drive and Robinson in Eastown. The cast and crew will visit other West Michigan places such as Allendale on March 5 and Grand Haven March 19, before making their way back to Grand Rapids to wrap up filming.

While “The End of the Tour” is not a big budget action movie, at less than $4 million, the location of the set, the actors and the crew are what makes this movie exciting, especially to the Grand Rapids community.

The production company is looking for extras of all ages, as well as used cars made prior to 1996 to put in the film. Students interested in an unpaid position as an extra should send an email to michaeljaymedici@gmail.com with a headshot as well as their name, age, and contact information. Anyone who would like to see their car on the big screen should contact the same email address with information about and pictures of their car. They don’t want any “glamorous unused vehicles.”

“As long as they can drive to the set and look OK,” said Michael Madici of the film’s casting department. “Any car that looks like they could be on a rental lot or dealership is a plus.” The production crew is casting extras until the end of March, and is asking for vehicles beginning March 5.