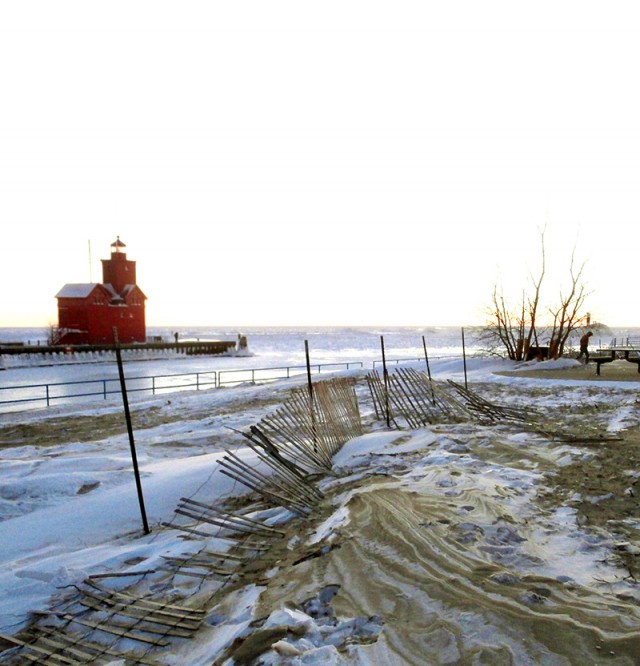 Sand, sun, and the iconic waves of the Great Lakes beckon tourist in the summer. However, the winter weather transforms piers and lighthouses into ice sculptures that have their own draw. One should have a higher level of caution if choosing to brave the cold for a glimpse of Holland’s watery winter wonderland.

There are several different governing bodies on the Holland Lakeshore. The Coast Guard is responsible for water safety issues, while the Department of Natural Resources regulates the state parks. The shocking thing is that neither performs ice rescue or have authority over the pier.

“We don’t do ice rescues here at station Holland. We don’t have the personnel.” said Chief Taquette of the Holland Coast Guard.

Supervisor Jody Johnson of the DNR draws attention to the true ownership of the pier.

The Holland pier doesn’t have any railings protecting pedestrians from the water. Johnson explains that the Army Corps of Engineers will put signs on the piers that say, “This structure is not designed for pedestrian traffic.”

“Even when it’s summer and nice and warm, it really is not a structure for people to walk out on, but we know that people do,” said Johnson. “Specifically in the winter time I would strongly advise that no one goes on the pier…, but at the same time it’s not really even my own property at the State Park level. Right now the pier is so rounded with ice and snow and all the buildup out there. I think that anyone going out there is really taking their life in their own hands.”

The danger goes beyond walking the pier. Wandering the hilly “icebergs”, as Johnson refers to the packed ice along the shoreline, can also be dangerous. He has a warning for those venturing out on the ice,

“Because they are out on the water… sometimes the wave action underneath carve the bottom side of them out. You could walk over something that is hollow and fall through it into the water with icy sides so that you can’t climb out. It could be 6 feet deep, but if you can’t climb out, you are going to freeze to death if someone can’t get you out.”

Thankfully the Holland DNR has not had to do any rescues this winter.

There is only a certain amount of stuff we can do out there. I hate to jeopardize the life of me or my staff, Johnson said. “Most of our people are not trained in ice rescue techniques and we don’t have equipment for ice rescue as far as the Mustang survival suits.” Johnson explains that Mustang is the brand of the dry suits that are used for ice rescue. The fire and sheriff’s department are responsible for the majority of ice rescues.

According to Johnson, the DNR is limited in what they can safely do. “If someone fell in the water out there and was having a hard time I’d have to choose at that time whether or not I felt comfortable doing or going where I could to try and help them. You want to do what you can do, but you don’t want to end up becoming a victim either.” 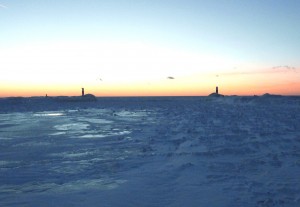 The DNR does the majority of the patrolling of the beach and pier. “Of course we aren’t out there patrolling the place day to day like we do in the summertime, where there are a lot of people out there for the beach,” Johnson said. “We try to keep the place open so people can drive out there and look over the lake even in the wintertime.”

Sometimes even keeping the Holland State Beach open in the winter can be difficult. The DNR sometimes is unable snowplow because of the drifts of snow. Johnson said, “We leave the beach open through the winter months so people can go out there and walk around on the beach, look at the waves, and watch the sunset. But they also need to watch and see what the status is of the snow plow.”

Adding to the danger of getting stuck in the snow is the poor quality of cell phone reception. “Phone service doesn’t work very well out there sometimes because of the sand dunes along the shore lines. So you might have a problem if you get out there and get stuck in a car if you can’t call… to get someone to rescue you. You would be stranded out there in the freezing cold weather,” Johnson said.

Chief Taquette shared the Coast Guard’s final recommendation, “We recommend that everyone stay clear of hazards where you can get hypothermic within minutes.”

Johnson finally advised that people take personal responsibility for themselves. He said, “It really leaves it up to the person to make sure that they don’t put themselves in a difficult situation. They shouldn’t go out there walking on the pier thinking that if they fall in someone is going to rescue them.”

There is more than one way to see the pier in the winter. Holland has a webcam on spyglass hill facing the pier. The webcam refreshes a still picture every 5 seconds. Go to spyglasshill.com for a view of the Holland’s pier.