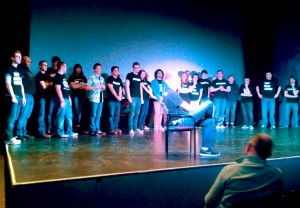 On March 10, Compass College of Cinematic Arts welcomed improv groups from different colleges into their doors to entertain the audience with laughs and entertainment as a part of Gilda’s LaughFest. The College Improv Showcase had a great turnout with nearly 80 people in attendance.

From start to finish, the improv groups had the crowd laughing and clapping to their hilarious performances. The comedy was made up on the spot and required the participation of the audience.

“The improv groups were good. They all looked like they were having fun,” said Tom Dula, a third year LaughFest volunteer. Dula has volunteered at different LaughFest venues, including Jim Gaffigan, showcase comedy, amateur hour and Lily Tomlin. “It’s been fun being a part of LaughFest. Gilda’s Club is great and I think the whole event LaughFest is awesome. I’m donating my time to a worthy cause and get a good laugh out of it.”

The Switch Left game required them to improvise comedy skits using the phrase, “cut that out!”

During the Transits and Exits Café game the audience gave the troupe four words (compass, calculator, purple, and tarantula) which the group had to be and make funny scenes out of.

The crowd seemed to enjoy The Director’s Cut game. During the segment, the group repeated the same scene of a man and his wife in different film genres, switching from western to drama to extreme twists.

The last game they performed was Ding, which they would perform scene of various nature and correct or change the scenes to make them better in a comical way each time they heard a ding. The last game by far, judging by the volume increase in applauses and laughter, was the crowd favorite by the improv group.

Matthew Ferschneider, Royal Players member and Central Michigan University student, tried out in the spring to be a part of Royal Players Improv group and started performing last fall semester.

He said one day he would love to be a comedian or a writer on a comedy show. Next year, Ferschneider would like to perform stand-up comedy for LaughFest.

The second troupe to perform was Trap Door Improv of Calvin College. Trap Door Improv performed another game, called Ding, in which one of them had to let other members of the improv group into their “party behind a fast food restaurant” and figure out what their issue was. For example, someone was terrified of human contact, another had x-ray vision, and someone else was obsessed with mascara. Besides Ding, the group performed numerous skits involving different characters and everyday situations.

Michelle DeWier of Calvin College came to support her school’s improv group with some friends.

“They were great! I’d come back next year,” DeWier said.

Vanderprov of Hope College was the last improv group to perform that evening. They acted out numerous skits where they would continue to switch out group members to pump up the entertainment levels when they found more creative ways to do the skits than the members previous. This group had the crowd keeling over in their seats with laughter. Their Skits included scenarios of two sons fishing with their dad, restaurants, newscasts and more.

“Oh yeah, I’d come back next year and laugh some more,” said Davenport University graduate Rachel Coates, “Vanderprov was good. They all were funny.”

To wrap up the evening, all three improv groups came together to perform as one in two skits. The audience yelled out what was in the soup, while a single member of the group called out “waiters” (the other improv group members) over to deal with the situation.

“Waiter,” one guy signaled an improv comedian over.

“Yes, sir?” The waitress walked over, smiling with an imaginary food tray carried high in one hand.

“There’s a roommate in my soup,” he said, motioning to the invisible bowl of soup.

The waitress grimaced as she eyed the soup. “Ooo are you…are you going to be able to live with that?”

The audience took it all in and left the evening’s College Improv Showcase smiling, chatting about the performances, and laughing on their ways of the doors. 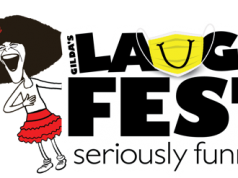 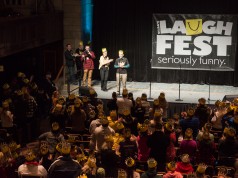