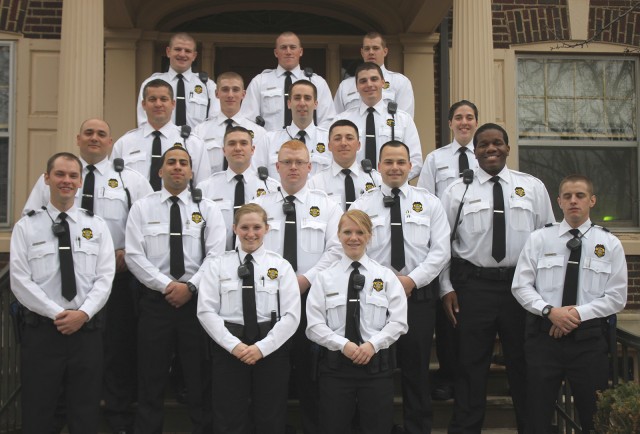 Each semester, a new class of cadets enters into the police academy. With physical training, and specialty courses such as writing reports, criminal law and accident investigations, one would think these cadets are almost fully prepared for what’s to come when they graduate.

However, one important key is missing, community interaction. This is why the academy has implemented a community service project for each squad.

The cadets are broken up into squads, A and B. Those who are in A, do their training and courses during the day, while squad B goes at night.

Each squad is responsible for coming up with a project to do in the community to get the feeling of giving back and being leaders.

Squad A leader, Mitchel Harkema, 27, of Hudsonville and his group of cadets came together and decided on one main project as well as multiple mini ones.

As their big project, the cadets decided to be mentors.

“The Chief of Wyoming police got in contact with us and wanted us to sign up for a mentoring program called “One Wyoming One on One,” Harkema said. “They place mentors, after you go through a background check, in different needy school areas.”

Wyoming, Kelloggsville, and Godfrey are just a few of the schools the program works with.

The majority of the cadets were placed with elementary students in Kelloggsville.

“One day a week, for an hour a week, either right before school, during their lunch or right after school, you go there and just hang out with your mentee. Help them with their homework, play a game, or shoot hoops.”

The Director of the Police Academy, Jodi Richhart has also taken on a mentee for this project.

Besides being mentors to young children, the cadets from squad A have also done a few other community service projects.

Another project the cadets did was through a Griffins game at the Van Andel.

“The proceeds from the ticket sales are going to the Van Andel Institute for fund different cancer researches,” Harkema said. “With our Kelloggsville outreach, we found out about a family, one of the teacher’s had to take leave because her 3-year-old daughter, Cambree, just got diagnosed with Leukemia. So we’re doing that in honor of this family.”

The cadets also pulled together something special for Cambree and her family.

“We pulled some funds and bought the family tickets to the game. She also just recently had to shave her head, so we ordered her one of our fleece stocking caps in purple for her.”

The cadets, through policeone.com, also discovered another young cancer patient they wanted to reach out to.

“A boy in Rhode Island, he also had cancer, he really loves the police. So for his birthday, which was March 7, we sent him some birthday cards that we all signed and a squad photo. We also sent him some academy stuff, a lunch box and water bottle. Then we added a remote control police car,” Harkema said.

Besides mentoring and raising money for cancer research, a few different squad members have participated in the Polar Plunge, sent care packages overseas to military officers, collected donations for shelters and made t-shirts to help raise money for the Paul Butterfield  scholarship.

With all of these different projects, squad A is learning to be role models in the community.

“I think it’s just great experience learning how to handle different situations,” Harkema said. “It might sound cliché, but to make a difference in these kids’ lives, I think is one of our big goals.”

Squad B has also participating in community service by taking on future police cadets as their mentees.

“We are going to mentor the new police academy students coming up, for the class after us and we are going to help out with the Metro Boot Camp,” said squad leader Maurice Daigneault, 35.

“We’re going to mentor them paperwork wise, getting ready for the interview process, sit down with them and ask them different questions to help prepare them. Even if we have to, we will help them pick out outfits for the interview,” Daigneault said.

“We plan on doing smaller things throughout the year, but those are our main ones right off the bat.”

By helping the incoming cadets, the squad will gain experience as being leaders as well as helping future police.

“We just want to give them a good taste of what it’s going to be like if they get into the academy,” said assistant squad leader Jeff Wysocki, 24.

The reasoning behind these community projects are not lost on the cadets.

“As much as we’re here to learn how to become police officers, I think they want us to get into the habit of going out and volunteering and being proactive in the community,” said Wysocki.