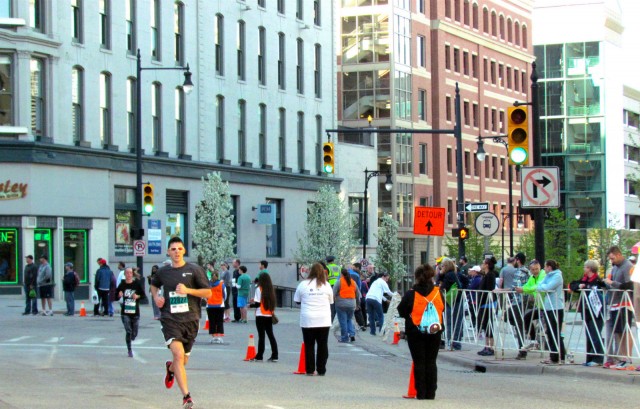 Approximately 18,000 participants took part in the 37th annual Fifth Third Riverbank Run Saturday morning. As a highlight of the day’s events a runner from Ann Arbor set the American world record for the men’s 25K.

Participants came to run in the 5K, 10K, or 25K races, as well as participate in a 5K walk through the Grand Rapids area.

In the 25K race, Samson Gebreyohannes Gezahai, 22, of Kenya, was the first person to cross the finish line, with an official time of 1:14:07.

Gezahai narrowly defeated 28-year-old Christopher Landry of Ann Arbor, who had a time of 1:14:18. As long as Landry’s time holds up, it will tie the current record for a 25K by an American.

Kellyn Johnson-Taylor, 27, of Flagstaff, Ariz. was the first woman to cross the finish line for the 25K with an official time of 1:25:25.

Landon Peacock of Alexandria, Va. was the winner of the men’s 5K race with an official time of 14:44. Peacock also came in third place for the 10K.

The race attracted runners from all over the world, and is also very popular among the West Michigan runners.

David Banko, 50, of Hastings, was among the group of runners in the 10K. This was the 10th time Banco ran the Riverbank run.

“I have been doing this for quite a while,” Banko said. “I used to do the 25K. In the past few years it has been a bit of a struggle. I just turned 50 this year….I have done about 25 miles a week (for training) to prepare.”

For a complete list of race results visit www.53riverbankrun.com/live-results.