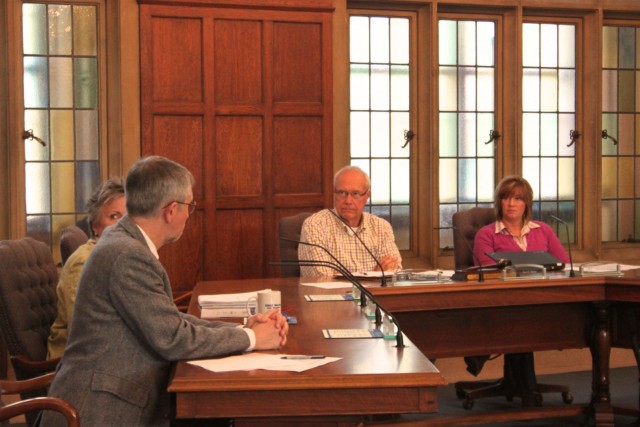 The Grand Rapids Community College Board of Trustees is voting on a budget proposal next month that would cut funding for several programs, including the Diversity Lecture Series and Spectrum Theatre, as well as reduce the Collegiate’s budget by more than half.

GRCC President Steven Ender was absent as Lisa Freiburger, GRCC’s Vice President for Finance and Administration, updated the board May 5 on a budget that was proposed in March. A final proposal will go up for review on June 2 and the board will vote on it two weeks later.

GRCC faces a deficit of $3.3 million, due mostly to dropping enrollment numbers, but Freiburger sounded optimistic.

“Summer tuition was initially thought to be down around 7 percent” Freiburger said. “Now it’s looking like it’s going to be closer to 3.85 percent.”

The board approved a tuition hike in March after the last budget proposal and parking rates will go up a dollar to $3.50 on Aug. 25. These two decisions will play a big factor in balancing the budget, but in order to get the college out of the red some programs can no longer be funded.

Out of 25 programs on a list of transfers from the designated fund, only eight remain. Seven of those eight will receive the exact same funding as they did the year before. Only The Collegiate’s budget will be reduced, from $29,000 to $12,000. That leaves 17 programs that will no longer be funded by GRCC.

“We’re looking at different funding methods for some of the line items so that they become self-sustaining in the future,” said Leah Nixon, the Director of Communications for GRCC. “The programs are not going away.”

Actors’ Theatre, a community theater group based at the college, recently volunteered to cut its own funding from the college. The finance office has decided that other programs like the Diversity Lecture Series, who receive outside funding from sources other than GRCC, should start to think like Actors’ Theatre.

The Woodrick Diversity Learning Center, along with its Diversity Lecture Series, will lose over $45,000 in funding. Although it is in a similar situation, the cuts were not voluntary, like Actors’ Theatre’s.

“With enrollment down…I think that everybody knew that budget cuts were coming,” said Chris Arnold, Director of the Woodrick Diversity Learning Center. “It is a loss to all the programs that were cut, across the board, college-wide. We just have to be more creative with what we do and seek additional sponsors and support.”

The Woodrick Diversity Center has always received outside funding in the past, but this is the first year that it would have to be completely self-sustaining.

“We have pretty strong partners in the community that support our programming in the way of sponsorships,” said Arnold. “We might have to tap some potential sponsors that we may not have used in the past. Our goal is to maintain the quality of all of our programming.”

The board did not seem too surprised at the information presented and didn’t have many questions for Freiburger.

“This is the second or third time we’ve heard this information,” said Bert Bleke, the Chairperson of the board. “There were no surprises. Ms. Freibruger is so good and so thorough. There is a good deal of trust in her numbers.”

Along with that trust comes the knowledge that things will be changing at GRCC in the near future.

“There’s going to be some tough times in the next three or four years,” said Bleke. “The board and the school are going to have to make some tough decisions regarding the budget. I’m almost certain there is going to be cuts. What they are and how much is to be determined.”