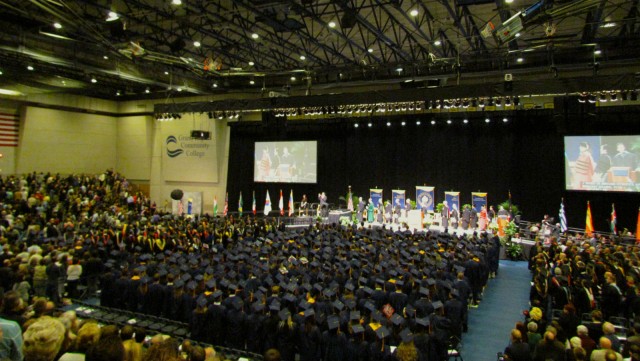 Around 450 of the 1,671 students who earned a degree from Grand Rapids Community College this academic year turned their tassels at the commencement ceremony on May 2 at Ford Fieldhouse.

Before the ceremony started, students conversed with one another as they lined up outside of the Fieldhouse. GRCC student Rick Zimonick, 32, graduated with an associates of Applied Arts and Sciences in Technology. “I had a great experience (at GRCC),” Zimonick said.

The ceremony began with GRCC President Steven Ender, giving statistics about the graduating class. Ender said the class of 2014 had an average grade point average of 3.18

Ender made a point to thank anyone who helped the graduates on their journey at GRCC. “Some very special people are with us… all the parents, family, friends, loved ones,” Ender said. “We know that without that support, our students would have a difficult time getting through this process.”

Ender also made reference to a graduate’s failed attempt to back flip on stage at Davenport University’s recent commencement, and asked GRCC graduates for “…no backflips tonight. If you dare try, you better pull it off!”

The commencement speaker was Grand Rapids Mayor George Heartwell. In his speech Heartwell encouraged students to make a vision of what they wanted for their success in life.

“When we act as if our vision is a certain reality, it becomes so,” Heartwell said. “Achieving your large vision requires large doses of hope. Hope is the fuel for transforming an individual life. An institution, a city, our planet…hope believes in the vision when everything else around you denies that vision…hope is the absolute certainty that your vision is right. Even if no one else around you can see its truth.”

The head of the music department at GRCC, Kevin Dobreff, sang the National Anthem, and GRCC music major, Chelsea Molin sang the alma mater and “Defying Gravity.” The GRCC wind ensemble under the direction of Michael Gillan played throughout the ceremony.

Next school year GRCC will be moving its commencement to the Van Andel Arena as a part of the college’s 100th Year Celebration. The commencement will take place from 6-9 p.m. on May 1, 2015.