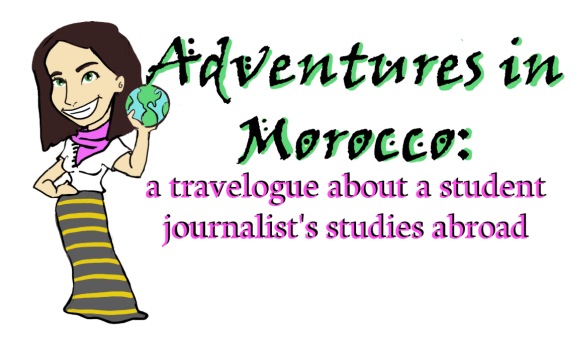 I have never traveled abroad before, besides to Canada a half dozen times in my life. The farthest north I have been is to Quebec, which is a French province in Canada. The farthest west I can remember traveling in the United States is St. Louis, Mo. I guess you could say I have a lot more traveling to do.

My name is Jacquelyn, and I started at Grand Rapids Community College in the fall of 2013. It was through my French class that I decided to sign up for the Morocco study away program.

What actually made me interested in traveling was a job I had for two summers in Vermont working with tourists. I worked at a country store, and always had great conversations with the people visiting from out of the country, and across the U.S. It was working at that tourist location that I started to have an itch to travel more than I already had.

About one week after I signed up, my mom asked me “do you actually know anything about Morocco?” I realized I didn’t know very much about it, besides what I learned from Google and Pinterest. I have fielded many “where is it exactly?” questions from friends and relatives.

Morocco is on the North West coast of Africa. It is about nine miles south of Spain, and five hours ahead of the Eastern Standard Time Zone. Morocco is about the size of the state of California.

It has been an average of 72 degrees this last week in the capital, Rabat. The official languages spoken among the people of the country are Arabic and Berber. French is also used very often.

The currency in Morocco is the dirham. Eight Moroccan dirham are equivalent to one U.S. dollar.

Everything I eat while I am there must be cooked, boiled, and peeled, as to hopefully assure the fact that I will not get sick.

On our trip we have four GRCC professors, and 10 students. We are going to be on our tour for 10 days. During the trip we will visit carpet, pottery and leather tanneries, among other places.

Ultimately I decided I wanted to go to Morocco because of the drastically different culture I would be exposed to. Women in Morocco, depending on how traditional their family is, have quite different expectations than that of women in the United States.

Going into this trip I am most worried about how going through such a culture shock for the first time could put me mentally on overload. But as a photographer I have always embraced the unknown in the past, so I am expecting myself to enjoy taking in another culture.

I am most excited about my trip because technically I am an ambassador for the United States and how I act is going to give Moroccans the impression of what Americans are like. And when I come home from Morocco, I will be an ambassador of Morocco, for Americans. People will want to know what type of experience I had in such a drastically different culture from ours.

Joining me on this adventure, and contributing to my travelogue, will be one of my Collegiate colleagues, Teagan Burns.