Protesters gathered in front of the Grand Rapids federal building Monday to protest the crisis in the Gaza strip. Both the Israeli and Palestinian side of the issue were represented.

Nearly 140 people that identified as “Protesting in solidarity with Palestine” gathered on the corner of Ottawa and Michigan around 4 p.m. Diane Baum, Grand Rapids, posted on her Facebook page about her involvement.

“The only reason the pro-Israeli people showed up is because of my post,” Baum said. “That’s the last time I advertise my involvement.” 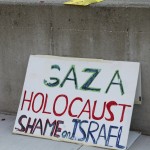 “I think we will have at least 150 people, and that’s lowballing it,” Burke said. “We aren’t mad at the pro-Israeli protesters. It’s the American government I have a problem with.”

Protesters plan to meet in front of the federal building, once again, Friday from 4 to 6 p.m.