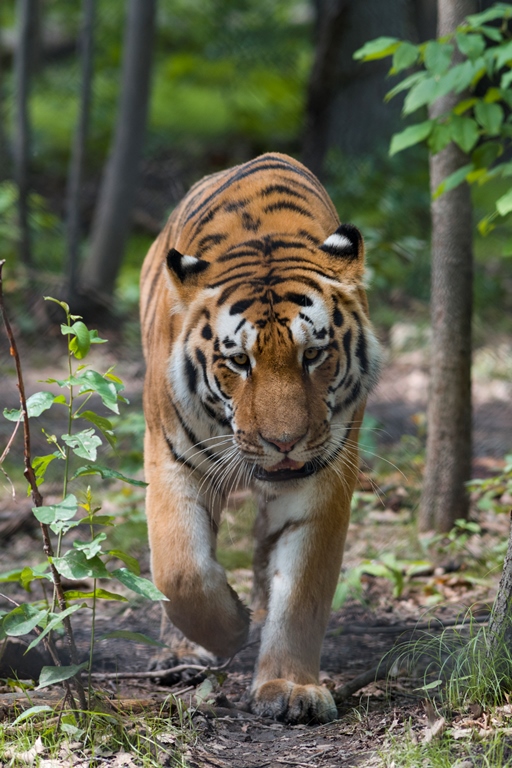 Three Amur tigers are now on display at John Ball Zoo, part of the new “Tigers of the Realm” exhibit. Opened on June 14, this marks the first time tigers have been in the zoo since 2009, when a female tiger was moved from Grand Rapids to Roosevelt Park Zoo in North Dakota.

“We have two young males, Yuri and Kuza, who are three years old and are closely bonded brothers,” said Dan Malone, General Curator for John Ball Zoo. “We also have a female, Nika, who is nine years old and recently had cubsWe’re very happy that the Nika was able to give birth to three healthy cubs, because we hope to become a breeding facility in the coming years”.

Amur tigers, often known as Siberian tigers, are the world’s largest cats and both males Yuri and Kuza weigh around 450 pounds. Although most cats are nocturnal, which can be at odds with the zoo’s opening hours, Malone says tigers are a little bit more flexible.

“Tigers are very opportunistic,” said Malone. “They’re certainly more comfortable at night, but If they’re hungry or something forces them to be active during the day, they’ll do that as well. Obviously we’d like them to be more active during the day, so we’d like to get them comfortable with their new environment and have them roaming around and acting like they normally would.”

As you can imagine, a large predatory animal like a tiger eats a lot. But, it’s also a cat, so don’t expect them to be active unless they really want to.

“They’re not that dissimilar from a house cat. Cats are, in general, pretty lazy animals.” Said Malone, laughing. “They spend much of their time sleeping, so we often feed them late in the day, which is something they look forward to when they come inside. Their diet ranges from eight to 10 pounds of meat per day, they’re big eaters.”

Tigers are some of the most popular animals for zoo visitors to see, and everyone seemed quite eager to catch a glimpse of these rare felines. With an estimated 400 Amur tigers left in their natural habitat, conservation is key to helping this species survive.

“Seeing these tigers here in a safe environment is a great message about the importance of conservation,” said Malone. “Although there are only 400 Amur tigers in the wild now, back in the ‘30s and ‘40s there were only around 40 animals left in their natural habitat. Conservation begins right where you live, it’s not something that only happens in Africa or Asia, we have to take responsibility. The important thing about zoos and what we do here is that we allow people to see the work we have done when it comes to wildlife conservation. When people are able to see the animals we’ve helped protect, they’ll gain a better understanding of what it takes to help an animal survive in the wild.”

All three tigers are on display at John Ball Zoo, located at 1300 W Fulton St. The zoo is open from 9 a.m. to 6 p.m. and is free for GRCC students with identification. For more information, visit www.johnballzoosociety.org

Sophomore’s show out in Raiders’ tough loss to Ancilla

Sophomore’s show out in Raiders’ tough loss to Ancilla

Raiders women’s basketball wins a close one on the road to...